Temperatures fell so low over the weekend it allowed nature to provide some beautiful scenes across parts of the UK.

In Derbyshire stunning icicles formed at Kinder Downfall, where the icy weather caused the 98ft (30m) waterfall to completely freeze over. 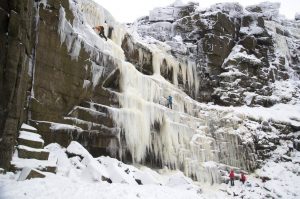 “I was there about 07:00 and made the one-and-a-half hour climb up there having set off in the dark, and then the climbers arrived,” he said.

There were about five or six climbers who tackled the frozen waterfall, Mr Kirkpatrick added. 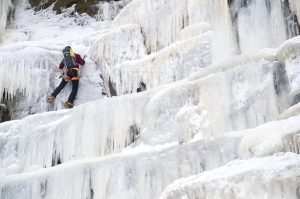 The photographer said he had an hour to snap the photos before the ice began to melt.

“I was shielding my laptop and trying to quickly get the shots as the ice was falling down.”

Kinder Downfall is the tallest waterfall in the Peak District and sits on the edge of the hill Kinder Scout.

It’s not the first time the waterfall has frozen over in this way and has become a popular attraction for daredevil ice climbers at this time of year.