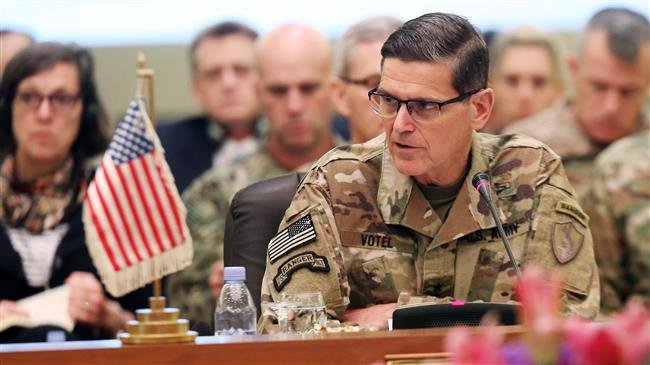 US to withdraw from Syria ‘in weeks,’

A top American general is claiming that Washington is “right on track with” its supposed Syria withdrawal.

US Army General Joseph Votel, head of the US Central Command, made the comments Monday long after President Donald Trump ordered withdrawal of ground forces from war-ravaged Syria.

“In terms of the withdrawal … I think we’re right on track with where we wanted to be,” Votel told reporters travelling with him during a trip to the Middle East. “Moving people is easier than moving equipment and so what we’re trying to do right now is again [to] kind of clear out those materials, that equipment, that we do not need.”

Asked when the withdrawal may begin, he answered: “Probably weeks. But again, it will all be driven by the situation on the ground.”

Operation Inherent Resolve is the name of a US military campaign launched in August 2014 after the Daesh terrorist Takfiri group overran large swaths of Syria and Iraq.

The US has ever since maintained military presence in Syria without any authorization from the Damascus government or a UN mandate.

Trump called for a swift troop pullout on December 19, alleging the defeat of Daesh and surprising many within the US establishment and abroad.

The announcement further resulted in the resignation of Secretary of Defense James Mattis, US anti-Daesh coalition envoy Brett McGurk and Pentagon chief of staff Rear Admiral Kevin Sweeney who disapproved of the president’s decision.

Trump, nevertheless, seemingly gave in to pressure to slow down the troops pullout two weeks later.