The Egyptian parliament on Thursday approved in principle proposed constitutional amendments that would allow President Abdel Fattah al-Sisi to stay in power until 2034 and boost his control of the judiciary.

Parliament Speaker Ali Abdelaal said that 485 MPs of the 596-seat assembly voted in favor of the changes, comprising more than the two-thirds majority needed to pass the amendments. 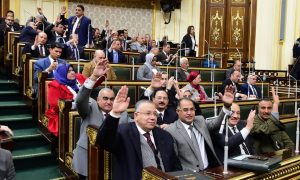 The proposed changes will now go for a review in a parliamentary committee and then return to parliament for a second vote before they are presented for a national referendum expected before the middle of the year.