Donald Trump on Friday declared a national emergency in a bid to fund his promised wall at the U.S.-Mexico border without congressional approval, an action Democrats vowed to challenge as a violation of the U.S. Constitution.

The Republican president’s move, circumventing Congress, seeks to make good on a 2016 presidential campaign pledge to build a border wall that Trump insists is necessary to curtail illegal immigration he blames for bringing crime and drugs into the United States.

Within hours, the action was challenged in a lawsuit filed on behalf of three Texas landowners, saying that Trump’s declaration violates the U.S. Constitution and that the planned wall would infringe on their property rights. Both California and New York said that they, too, planned to file lawsuits. 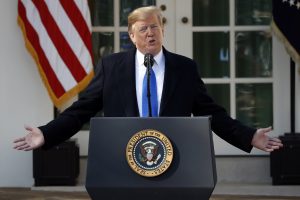 Hours after Trump’s announcement, the Democratic-controlled House of Representatives’ Judiciary Committee said it had launched an investigation into the emergency declaration. In a letter to Trump, committee Democrats asked him to make available for a hearing White House and Justice Department officials involved in the action. They also requested legal documents on the decision that led to the declaration, setting a deadline of next Friday.

“We believe your declaration of an emergency shows a reckless disregard for the separation of powers and your own responsibilities under our constitutional system,” said the letter, signed by Chairman Jerrold Nadler and other top Democrats on the panel.

Trump on Friday also signed a bipartisan government spending bill that would prevent another partial government shutdown by funding several agencies that otherwise would have closed on Saturday.

The funding bill represented a legislative defeat for him since it contains no money for his proposed wall – the focus of weeks of conflict between Trump and Democrats in Congress.

Trump made no mention of the bill in rambling comments to reporters in the White House’s Rose Garden.