Just hours before polls were to open, Nigeria delays election.

The delay is expected to spark anger in Africa’s most populous nation after many people had relocated for the chance to vote.

Nigeria’s presidential election has been postponed just hours before polls were due to open.

The country’s election commission said it was delaying the vote to 23 February due to unspecified “challenges”, amid reports that voting materials had not been delivered to some areas.

Mahmood Yakubu, chairman of the Independent National Electoral Commission (INEC), said: “This was a difficult decision to take but necessary for successful delivery of the elections and the consolidation of our democracy.”

A review of logistics led the commission to conclude that going ahead with the election as planned was “no longer feasible,” he said.

Nigeria also postponed its presidential election in 2015 because of deadly insecurity in the northeast of the country, which remains under threat from Islamic extremists.

More than 84 million voters had been expected to head to the polls on Saturday, in what is seen as a close and heated race between President Muhammadu Buhari and Atiku Abubakar, a billionaire former vice president.

Both men have pledged to work for a peaceful election even as their supporters, including high-level officials, have caused alarm with warnings against foreign interference and allegations of rigging.

Mr. Buhari made history when he came to power in 2015 with the first defeat of an incumbent Nigerian president.

That election was hailed as one of the most transparent and untroubled ever in Nigeria, which has seen deadly post-vote violence in the past.

Mr. Buhari’s term has been marked by a crash in global oil prices that spun Nigeria’s economy into a rare recession, from which it only emerged in 2017.

Unemployment shot up and the country passed India as the nation with the most people living in extreme poverty. More than 13 million children are said to be out of school.

Many Nigerians also worry about Mr. Buhari himself after he spent more than 150 days outside the country for unspecified medical treatment. 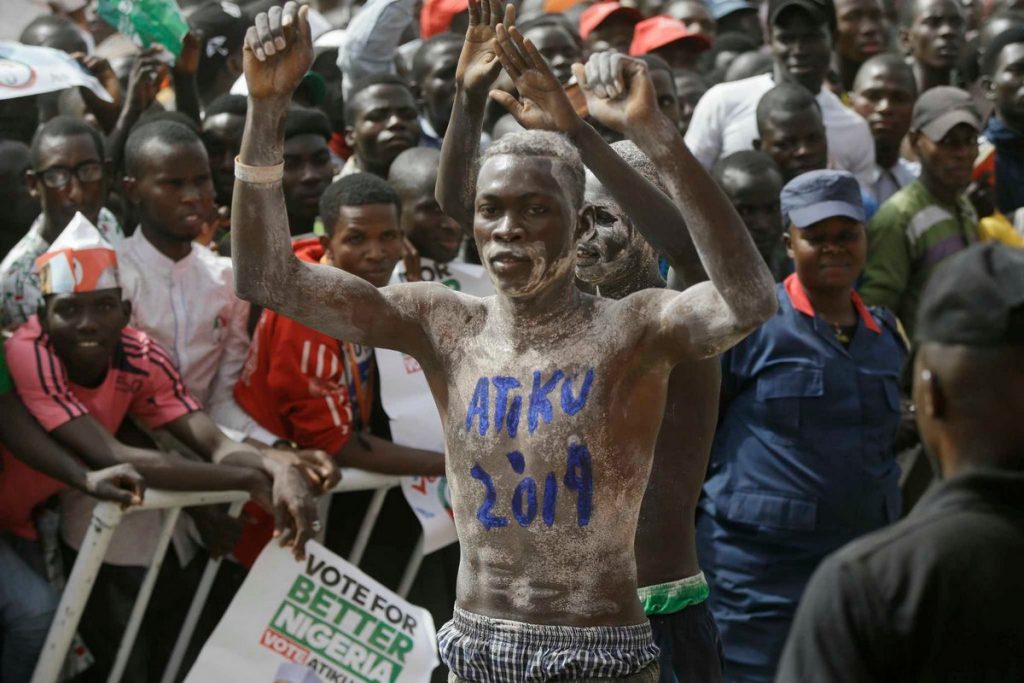 A Supporter of Nigerian presidential candidate Atiku Abubakar, of the People’s Democratic Party, attends an election campaign rally on the street in Yola, Nigeria, Thursday, Feb. 14, 2019. (AP Photo/Sunday Alamba)Meanwhile, Mr. Abubakar has followed in the footsteps of US President Donald Trump by campaigning on the theme of “Let’s Make Nigeria Work Again”.

He has vowed to apply his business acumen to privatize Nigeria’s state oil company and lift 50 million people out of poverty by 2025 but has faced years of corruption allegations.