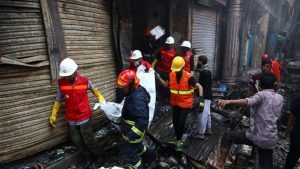 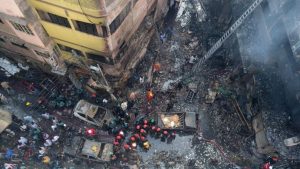 The blaze broke out at night in a residential building that had flammable material stored on the ground floor. Members of a bridal party are thought to be among the victims. It is not yet clear what started the fire. The centuries-old Chawkbazar district has narrow streets and buildings very close to each other. Large building fires are relatively common in densely populated Bangladesh, owing to lax safety regulations and poor conditions. Hundreds of people have been killed in recent years. On Sunday, a fire in a slum in the coastal city of Chittagong killed at least nine people.