“The Islamic Republic of Iran will continue to stand by the Syrian government and people like before.” Rouhani said.

“In fighting terrorism in Syria, the Islamic Republic of Iran has always stood by the people and government of the country, sparing no effort in this regard,” he added.

He further stressed that Iran is ready to have a role in Syria’s reconstruction, adding “Tehran supports Damascus in the process of stability and return of refugees.”

“Iran and Syria have many religious and cultural bonds, and relations between the two countries are based on brotherhood and unity.”

For his part, the Syrian president said the “Syrian people and government always appreciate the Iranian Leader, government and nation’s support in fighting terrorism in Syria and the region.”

“Today, Syria enjoys more security and stability compared to the past,” al-Assad added.

“We acknowledge Iran’s approach in multilateral cooperation, including the Astana Process and the recent Sochi Summit,” the Syrian president said.

Al-Assad also met with Leader of the Islamic Revolution Ayatollah Ali Khamenei in Tehran earlier in the day. 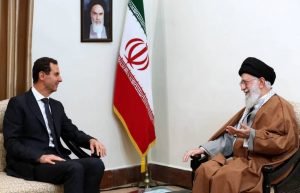