Activists of Pakistan-India Peoples' Forum for Peace and Democracy rally against any escalation of Pakistan-India tension, in Islamabad, Pakistan, Thursday, Feb. 28, 2019. Pakistan's Prime Minister Imran Khan pledged on Thursday his country would release a captured Indian jetfighter pilot, a move that could help defuse the most-serious confrontation in two decades between the nuclear-armed neighbors over the disputed region of Kashmir. (AP Photo/B.K. Bangash)

Indian military officials said on Thursday they welcomed Pakistan’s planned return of a captured pilot, but refused to confirm they would de-escalate a conflict between the two nuclear powers. 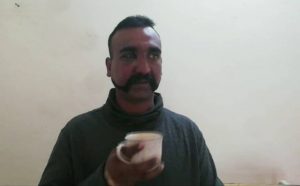 The pilot, identified as Wing Commander Abhinandan, became the human face of the flare-up over the contested region of Kashmir following the release of videos showing him being captured and later held in custody.

“We are happy our pilot is being released,” said Air Vice Marshal RGK Kapoor, at a joint news conference of India’s three armed forces on Thursday evening.

He did not say when asked by reporters if India considered the return a de-escalation in the conflict.