At least 23 people are known to have died in Lee County, some of them children, with the youngest believed to have been six years old.

There are fears that the death toll will rise. Dozens of people were hurt.

The sheriff of Lee County, Jay Jones, told local media that the devastation caused by the winds was “incredible”. 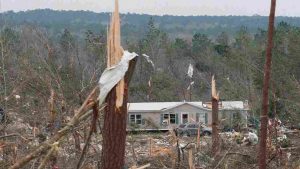 “It looks like someone has taken a giant knife and scraped the ground. There are slabs where homes formally stood, debris everywhere… whole forested areas with trees are snapped and lying on the ground… a lot of devastation out there.”

A state-wide state of emergency is in operation, with resources from across the state pouring into the affected area. Drones with infrared capability are being used in an attempt to find survivors.Rescue efforts were halted overnight because of the dangers associated with searching in the dark.