TOPSHOT - This overhead photo shows the sun rising above the skyline of Shanghai on a polluted day on February 23, 2018. / AFP PHOTO / Johannes EISELE (Photo credit should read JOHANNES EISELE/AFP/Getty Images)

The number of people dying as a result of air pollution may exceed the number killed by smoking, a major new study suggests.

German researchers estimate that as many as 8.8 million deaths per year globally can be attributed to dirty air.

In Europe alone they estimate there are more than 790,000 additional deaths as a result – double the previous estimate, which did not properly account for the additional rates of cardiovascular disease.

“To put this into perspective, this means that air pollution causes more extra deaths a year than tobacco smoking, which the World Health Organisation (WHO) estimates were responsible for an extra 7.2 million deaths in 2015,” said Professor Thomas Munzel, one of the authors from the University Medical Centre Mainz. “Smoking is avoidable but air pollution is not,” he added.

Regulators are looking to crack down on diesel cars in major cities as they are major producers of microscopic “PM2.5” particulates. These can contain heavy metals and other fuel chemicals which lodge in the lungs and enter the bloodstream. 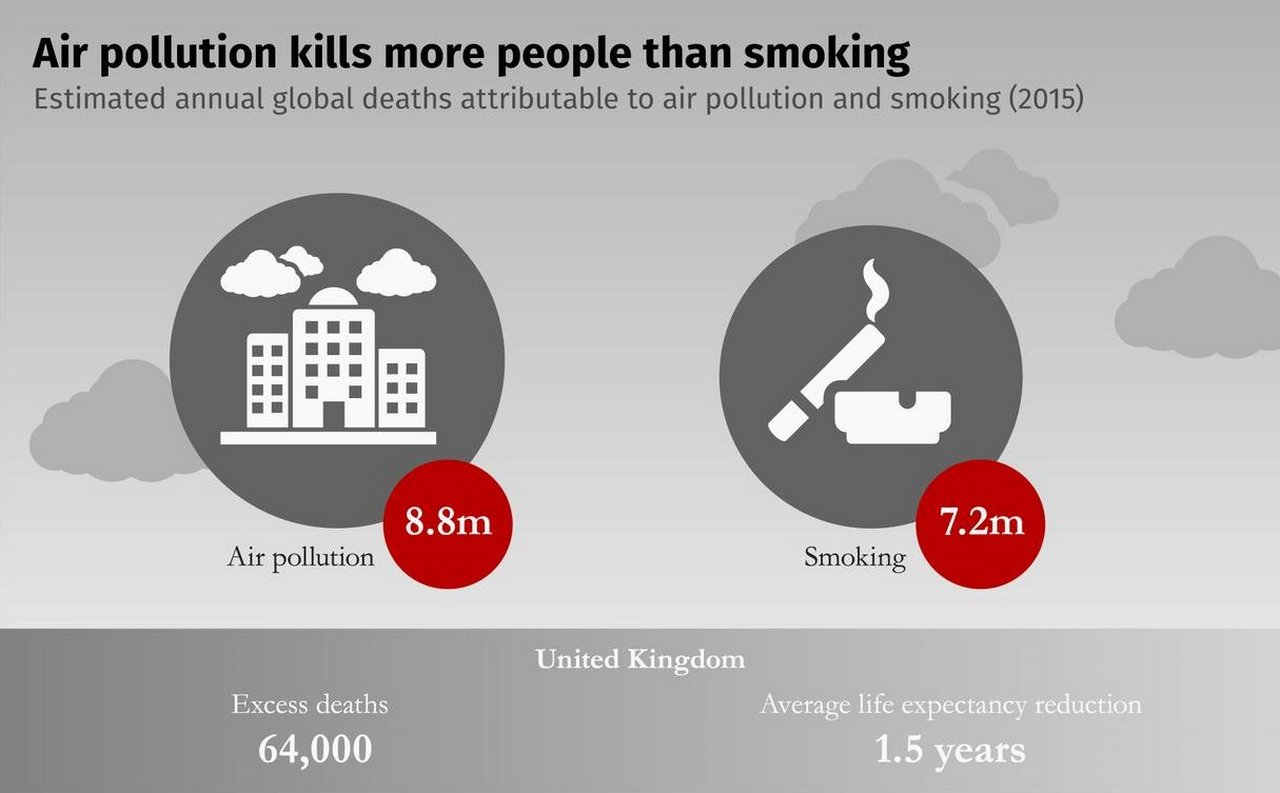 More than 29,000 other British deaths linked to air pollution were due to a range of conditions such as cancer, diabetes, and chronic lung disease.

This amounted to a reduction in average life expectancy of about 1.5 years in the UK; however; some of their European neighbors are much harder hit.

Co-author Professor Jos Lelieveld, from the Max-Planck Institute for Chemistry in Mainz, said: “The high number of extra deaths caused by air pollution in Europe is explained by the combination of poor air quality and dense population, which leads to the exposure that is among the highest in the world.”

In Germany, air pollution was said to have been responsible for an extra 124,000 deaths in 2015 and 2.4 years of lost life expectancy. An estimated 81,000 people were killed by air pollution in Italy.

The academics called on the European Union to adopt tougher safety limits for PM2.5s set by the WHO, as current air pollution levels in Europe are double the safe level set by the health body.

“Many other countries, such as Canada, the US, and Australia, use the WHO guideline,” said Professor Munzel. “The EU is lagging a long way behind in this respect.”