Iraqi military aircraft have dropped leaflets over desert areas in the country’s western province of Anbar, offering a reward of millions of dollars for intelligence that would lead to the capture of the leader of the Daesh Takfiri terrorist group, Ibrahim al-Samarrai aka Abu Bakr al-Baghdadi.

The planes dropped the leaflets over Upper Euphrates towns, bedouin encampments, and villages adjacent to the borders with Syria, Jordan and Saudi Arabia on Wednesday morning.

“The leader of Daesh and his fighters stole your land and killed your people, and now he is hiding in safety away from the death and destruction that he planted. With your intelligence reports, you can avenge,” the leaflets read.

They carried pictures of Baghdadi and a promise of a reward of 25 million US dollars for anyone, who provides information leading to the arrest of Baghdadi. The leaflets also provided two hot lines on WhatsApp messenger. 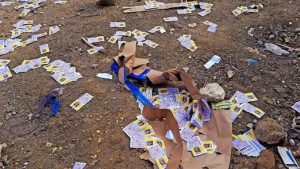