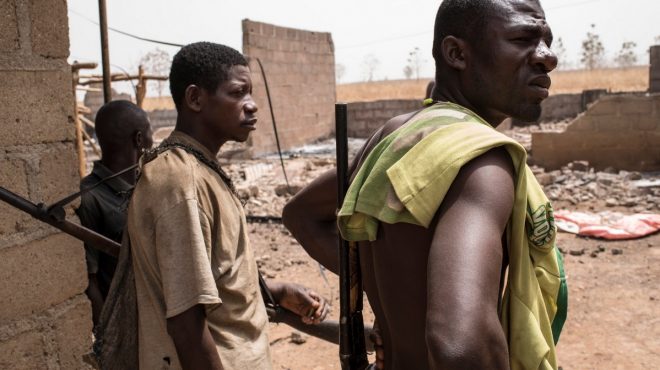 Vigilantes survey the damage in the village of Bakin Kogi, in Kaduna state, northwest Nigeria, that was recently attacked by suspected Fulani herdsmen, on February 24, 2017. Long-standing tensions between herdsmen and farmers have flared up again in Kaduna state, northern Nigeria, leaving possibly hundreds dead in tit-for-tat violence. Last weekend at least 21 people were killed and several homes were destroyed when suspected cattle drivers attacked five farming communities.But the clashes between the Muslim, largely Hausa-speaking Fulani cattle drivers and the mainly Christian farmers have escalated since December, when a Fulani chief was killed. / AFP / STEFAN HEUNIS (Photo credit should read STEFAN HEUNIS/AFP/Getty Images)

At least 50 people were killed in clashes with bandits in northwest Nigeria, which has been riven by cattle rustling and kidnapping, the state government said on Friday.

“We received reports that members of the (civilian militia) mobilized people… and confronted the bandits in the forest, which resulted in the killing of at least 50 people,” he said after returning from a visit to the area.

The victims were the militia themselves and other local residents they mobilized to help them, he added, condemning the vigilante force for confronting the gangs alone.

The bandits have long been a scourge of rural communities in Zamfara, raiding villages, stealing cattle, burning homes, looting food, and kidnapping for ransom.

Civilian militia groups comprising local people were formed as protection, given a lack of security personnel in hard-to-reach areas.

But the vigilante forces have only exacerbated violence and tit-for-tat attacks after being accused of extrajudicial killings of suspected bandits.

The state government outlawed the militia groups and deployed troops instead to curb unrest but with little success.

Last December an 8,500-strong militia force was reconstituted to assist the military and police in fighting the gangs, amid wider concerns about the rise in violence.

Nigeria faces a number of security challenges, including attacks from a Daesh-backed Boko Haram faction and renewed clashes between nomadic herders and farmers.

That has left the military overstretched and seen President Muhammadu Buhari criticized for failing to protect lives and property.

In Zamfara, an influential traditional chief called on the government to arm the vigilantes with assault rifles to defend themselves against the well-armed bandits.

Last month motorcycle-riding bandits gunned down 32 militia members outside Kware village in the Shinkafi district of Zamfara, according to the police.