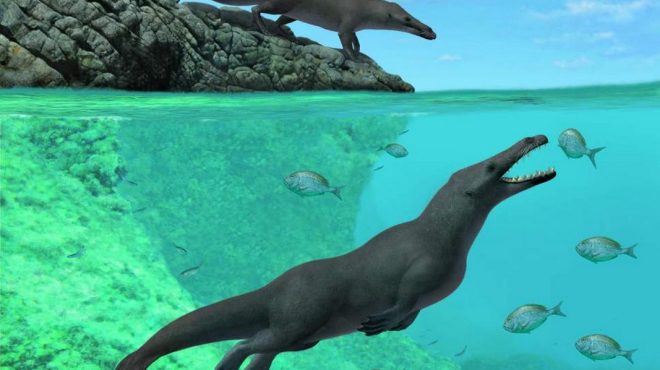 A four-legged creature that had a tail and webbed feet similar to those found on otters has been identified as an ancestor of the whale.

Fossils unearthed in Peru have led scientists to conclude that the enormous creatures that traverse the planet’s oceans today are descended from small hoofed ancestors that lived in South Asia 50 million years ago.

These small “hooves” at the tips of its fingers and toes suggest it was able to walk on land as well as swim.

An international research team came across the 4 meter-long specimen while digging for bones in the coastal desert of the South American country.

They named it Peregocetus pacificus, meaning “the traveling whale that reached the Pacific.”

While the fossils are not the oldest whales ever found, they are significant because they show these ancient creatures spread across the world from their initial populations in Asia.

“The evolution of whales is perhaps the best-documented example of macroevolution that we have, with the group going from small, dog-sized, hoofed mammals to the giants of the ocean we know and love today,” said Dr. Travis Park from the Natural History Museum. “However, despite having a good fossil record of the different stages involved, there are still questions remaining as to the routes that early whales took when they first spread around the world.”

The new find is helping the scientists answer that question.

“This is the first indisputable record of a quadrupedal whale skeleton for the whole Pacific Ocean, probably the oldest for the Americas, and the most complete outside India and Pakistan,” said Dr. Olivier Lambert of the Royal Belgian Institute of Natural Sciences, who led the research.

The scientists think these early whales reached the New World across the South Atlantic, swimming from the western coast of Africa to South America.

They would have been aided by strong westward currents, and the fact that the continents were far closer together than they are today.

The results were published in the journal Current Biology.