Iraq will be no starting point for action against neighbors, Salih assures Iran

In a veiled warning to the US, President Barham Salih of Iraq says his country’s soil will not be a “starting point” for any action against its neighbors, two days after Washington blacklisted an elite Iranian military force, which greatly contributed to the collapse of the Daesh.

Salih made the remarks in a meeting on Thursday with Iranian Ambassador to Iraq Iraj Masjedi in Baghdad, where the two sides exchanged views on bilateral ties and other issues of mutual interest, according to a statement by Iraq’s Presidential Office.

During the talks, Salih praised Iran for backing Iraqi armed forces in their counter-terrorism battles, which led to the fall of Daesh in late 2017.

The Iraqi president also “stressed that Iraq would not accept to be a starting point for any action that would harm its neighbors or strain the regional situation,” underlining the need for mitigating tensions in the already-troubled region.

Salih further expressed “Iraq’s keenness to be an arena for convergence of interests of the countries and peoples of the region.” 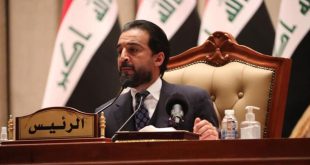