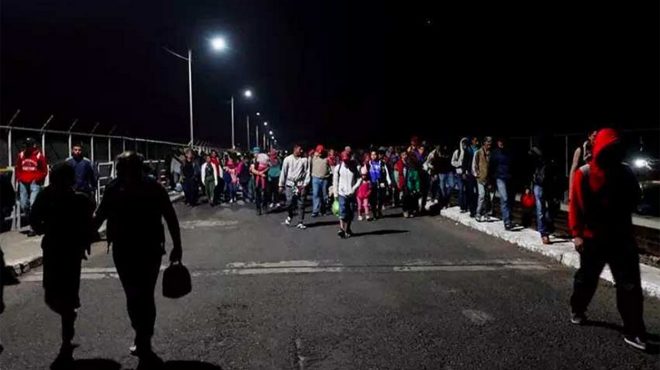 Over 1,000 migrants break out of southern Mexico detention center

More than a thousand migrants broke out of a detention center in southern Mexico on Thursday evening, authorities said, in a fresh sign of how a surge in arrivals has stretched the country’s resources to the limit.

More than half of the roughly 1,300 migrants later returned to the Siglo XXI facility in the border city of Tapachula in Chiapas state, but about 600 are still unaccounted for, the National Migration Institute said in a statement.

Migrants from Cuba, who make up the majority of the people being held at the center, were largely behind the breakout, the institute added. Mexican newspaper Reforma reported that Haitians and Central Americans were also among those who fled the facility, which has been crammed with people.

Mexico has returned 15,000 migrants in the past 30 days, officials have said, amid pressure from U.S. President Donald Trump to stem the flow of people north.

On Wednesday Trump reiterated threats to close part of the U.S.-Mexico border if Mexico doesn’t block what described as a new caravan of migrants headed north.

The majority of migrants moving through Mexico are from Guatemala, Honduras and El Salvador, but Cubans are also joining in large numbers. More than 1,000 people from Cuba are now in Chiapas, according to Mexican officials.