Ebrahim Raeisi is now officially the 8th president of the Islamic Republic of Iran after his mandate was endorsed by Leader of the Islamic Revolution Ayatollah Seyyed Ali Khamenei at a ceremony in Tehran, weeks after the ex-Judiciary chief won the country’s 13th presidential election by a landslide.

Ayatollah Khamenei’s decree, endorsing the presidential mandate of Raeisi, was read out at the event by head of the leader’s office.

In the decree, the Leader called on the new president to work toward activating the country’s capabilities and paving the way for a leap forward in all sectors, placing an especial emphasis on economy.

“Today, our dear country is thirsty for valuable service and is ready to make a leap in all areas. The country needs competent, jihadi, intelligent, courageous management that can organize the manifest and hidden capabilities of the nation — in particular those of the youth, which are much greater in scope than the problems,” read the decree.

A management is needed that can bring these capabilities into the field for constructive work and endeavor, eliminate the obstacles in the way of production, seriously pursue policies for strengthening the national currency, and empower the middle and lower classes of society that are shouldering the burden of economic problems, it added.

In a speech, President Raeisi described the June 18 election as a manifestation of religious democracy in the Islamic Republic.

“Despite all the hostile (propaganda) by the enemies, the safety precautions dictated by the coronavirus pandemic and other problems, the turnout was magnificent and people created a great epic in this election, disappointing enemies and enheartening friends,” he said.

Through their participation in the election, Raeisi said, the Iranian people sent a message that they are demanding “change, justice as well as a fight against corruption, poverty and discrimination.”

Raeisi pointed out that the people’s trust in the administration has been hurt more than their livelihoods, adding that by voting, they demonstrated that they want the new administration “to restore that trust and reduce the gap with the public.”

A strong relationship between the nation and the administration is the key to resolving problems and helping the country stand against enemies, he said.

Raeisi also called on all people, including intellectuals, thinkers, and officials, to work together to bring about the changes needed by the country.

“We will certainly seek to lift the oppressive sanctions, but will not tie the people’s livelihoods and economy [to the sanctions] or the foreigners’ will,” he added. 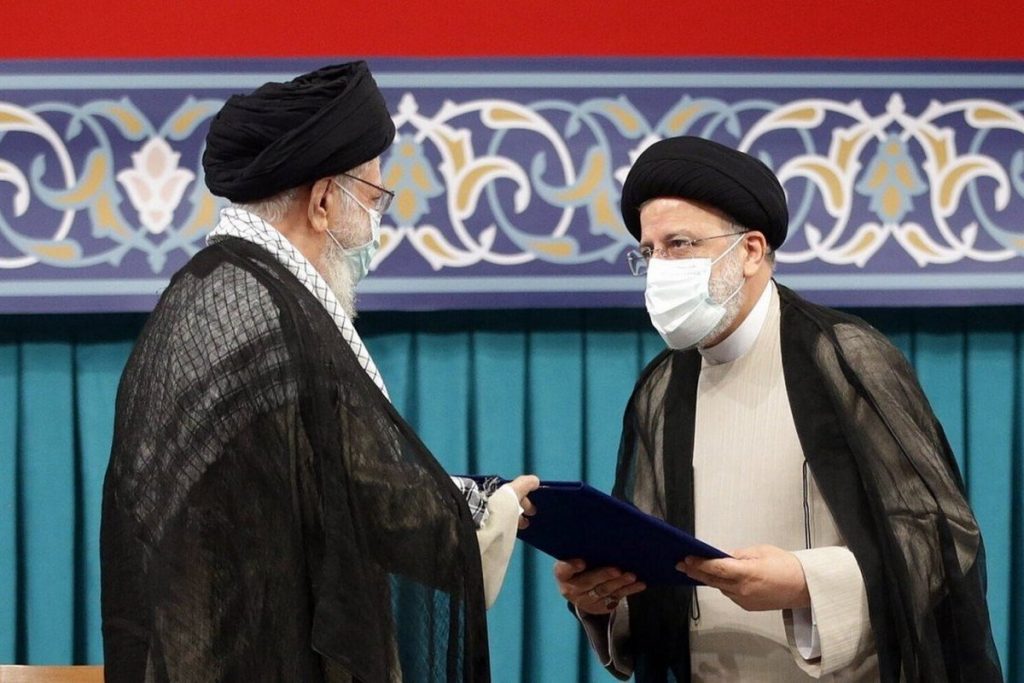 Delivering a speech at the event, the Leader said in many countries, the transition of power is usually marred by conflict, but the process in Iran has been peaceful and secure at various junctures.

“This [endorsement] ceremony, which is based on the Constitution and is a legacy of the great Imam [Khomeini], has been repeated many times over the past decades. It is a symbol of the transition of the very important responsibility of the government’s executive branch, namely managing the country, in a rational, peaceful and dignified manner. This is a highly significant issue,” Ayatollah Khamenei added.

The Leader further called for a swift formation of the administration and said, “The country’s conditions do not warrant a delay” in the process.

Ayatollah Khamenei advised the new president to make efforts to realize the “Popular Administration” slogan, under which he campaigned for election, and maintain a close relationship between the administration and the people.

“Resolving the economic problems takes time. Our dear people already know that,” said the Leader. “Endeavors should be made to shorten the period as much as possible.”

The ceremony took place at Imam Khomeini Hosseiniyeh in Tehran in full compliance with COVID safety protocols and was attended by the country’s senior state and military officials.

At the start of the ceremony, Minister of Interior Abdolreza Rahmani-Fazli presented a report on the June 18 presidential election, which saw Raeisi emerge as the winner.

Airports in Tehran were closed for two and a half hours, and traffic restrictions were in place on the streets near the venue of the ceremony on Tuesday, the capital’s Traffic Police announced.

Raeisi, the eighth president of the Islamic Republic of Iran, won almost 62 percent of the votes in the June 18 presidential election and will succeed President Hassan Rouhani, who served two four-year terms in office.

Raeisi will take an oath of office in an inauguration ceremony at the Iranian Parliament (Majlis) on Thursday.

Seyyed Nezamoddin Mousavi, the spokesman for the Parliament’s presidium, said Monday that a long list of foreign officials and political figures have accepted Iran’s invitation to attend the event despite the COVID-19 pandemic.

He said 115 officials from 73 countries have already declared their readiness to attend the inauguration ceremony.

The heads of 11 international and regional organizations and the representative of the UN chief, along with officials from the Inter-Parliamentary Union (IPU), the European Union (EU), the Economic Cooperation Organization (ECO), the Conference on Interaction and Confidence-Building Measures in Asia (CICA) and the D-8 Organization for Economic Cooperation also known as Developing-8 have been invited to the event.

Mousavi said 170 domestic and foreign journalists have also received invitations to provide coverage of the event.

The Organization of the Petroleum Exporting Countries (OPEC) Secretary-General Mohammed Sanusi Barkindo, President of Iraq’s semi-autonomous Kurdistan Region Nechirvan Barzani, and Serbia’s Parliament Speaker Ivica Dacic are said to be among the guests at the inauguration ceremony.