‘I Shall Remain in Berlin’: Hitler’s ‘SUICIDE NOTE’ Goes on Sale in US.

The head of the auction house which is now selling Hitler’s note observed how in the document, the Nazi head tried to “portray himself as a valiant leader of his men until the end”, while in reality, his demise was far less glorious.

A telegram sent by Adolf Hitler in April 1945 to one of his generals, informing the latter that the Nazi leader intended to remain in Berlin in the face of the advancing Soviet troops, is now being auctioned by Alexander Historical Auctions in Maryland, the Daily Mail reports.

“I shall remain in Berlin, so as to take part, in an honorable fashion, in the decisive battle for Germany, and to set a good example to all those remaining”, the Hitler wrote to Field Marshal Ferdinand Schorner. “I believe that in this way I shall be rendering Germany the best service. For the rest of you, every effort must be made to win the struggle for Berlin. You can there help decisively, by pushing northwards as early as possible”. 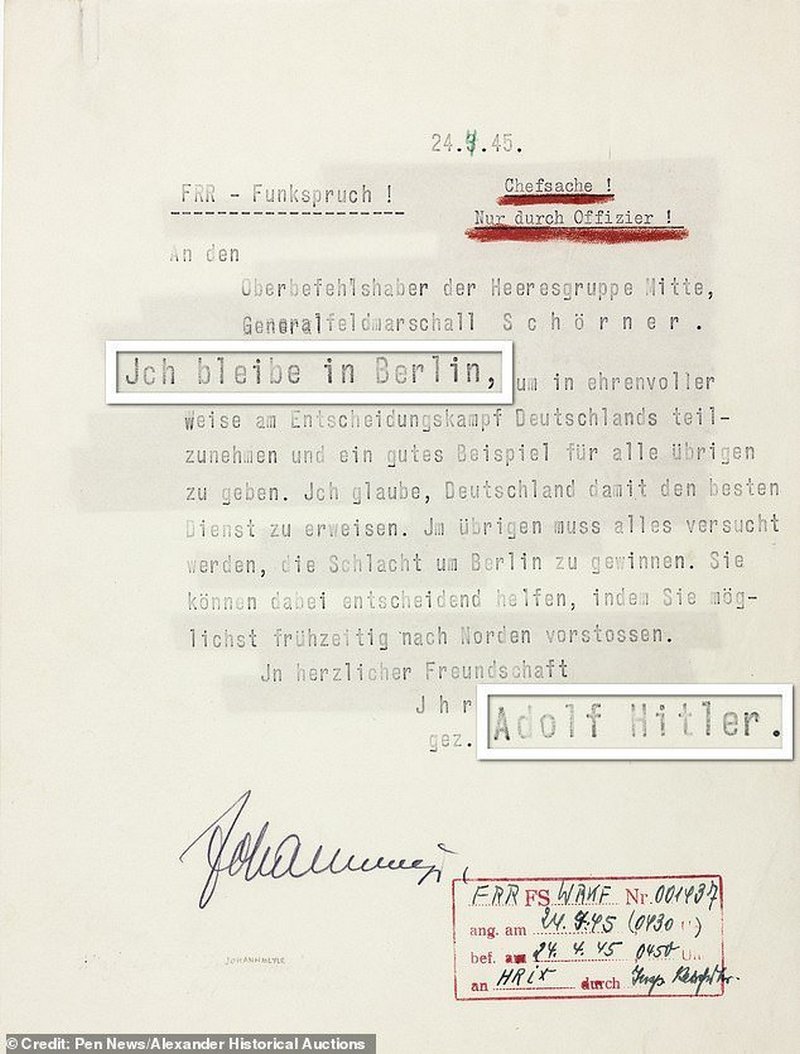 As Bill Panagopulos, president of the auction house, explained, the telegram serves as a unique piece of written evidence which confirms Hitler’s intention to remain and die in the German capital, essentially making it the Fuhrer’s “suicide note”.

“In it, he tries to portray himself as a valiant leader of his men until the end, when in actuality he shuffled into his bedroom and fired a bullet into his head”, Panagopulos remarked.

On 30 April 1945, Adolf Hitler and his partner Eva Braun committed suicide in the Fuhrer’s bunker in Berlin.

However, a set of declassified FBI documents revealed that in 1945, the agency investigated claims about Hitler fleeing Germany in a submarine and seeking shelter in Argentina.