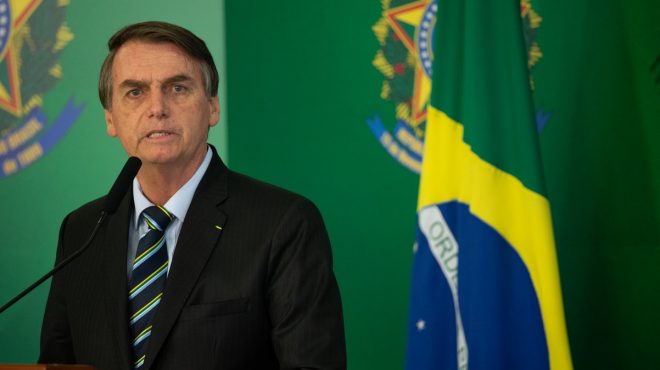 Brazil President Jair Bolsonaro on Wednesday said that fractures within the Venezuelan army could lead to the “collapse” of Nicolas Maduro’s socialist government.

“The information that we have is that there is a fracture that is getting closer and closer to the leadership of the (Venezuelan) armed forces,” Bolsonaro said in remarks broadcast by channel Globo News.

Bolsonaro, who assumed office in January, has helped lead the regional opposition to Maduro’s continued leadership in Venezuela. But he has stopped short of backing direct intervention in the neighboring country.

On Tuesday, Venezuelan opposition leader Juan Guaido, whom many nations recognize as the president of the South American nation, publicly called for the military to back him and oust Maduro from power, sparking protests and violence.

But on Wednesday Maduro remained in control as Guaido called for demonstrations throughout the country.

“There is no defeat,” Bolsonaro said of Guaido. “I commend and recognize the patriotic and democratic spirit that he has to fight for freedom in his party.”

Bolsonaro added that his government has had no contact with the United States regarding the use of Brazilian territory as a base for potential military intervention in Venezuela. If he were contacted, Bolsonaro said, he would involve his defense counsel and Congress to make a decision.