Iranian Foreign Minister Mohammad Javad Zarif dismisses the likelihood of a war between Iran and the United States but says certain “accidents” might ignite a military confrontation.

In a recent interview with the British online newspaper Independent at Iran’s Permanent Mission to the United Nations in New York, Zarif said although he did not think a war between Iran and the US was imminent, “accidents can happen” that then spiral into a “military conflict.” 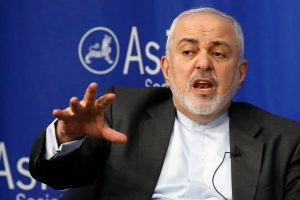 In response to a question about the nature of such accidents, Zarif gave the example of a recent move by US President Donald Trump to put Iran’s Islamic Revolution Guards Corps (IRGC) on its blacklist of foreign “terrorist” organizations.

A lack of “vital communication” between the IRGC forces and ships going through the Persian Gulf and the Strait of Hormuz, a strategic waterway where most of the world’s oil exporters pass through, can easily lead to conflict.

The United States in April officially registered the IRGC as a “foreign terrorist organization,” according to a notice published on the website of the US Federal Register.