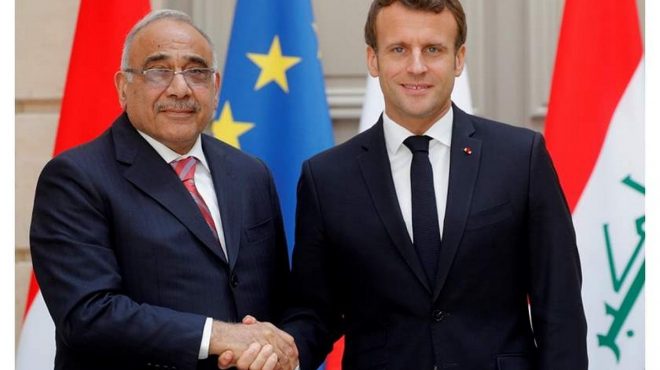 Prime Minister Adel Abdul Mahdi said that Iraq is working today on the reconstruction of Baghdad as a place of peace in which the various parties meet and that Iraq is a stabilizing factor in the region and the world.

This came during a joint press conference held by the Prime Minister in Paris with French President Emmanuel Macaron. At the beginning of the conference, Abdul Mahdi thanked Macron for his welcome and the accompanying delegation, indicating that he welcomed Iraq and the Iraqi people and their peoples of grievances and sacrifices not only by fighting , But over the past decades long because of dictatorship, discrimination and racism.

He pointed out that France has stood with Iraq always and received many Iraqis, a country of asylum and appreciate the difficulties and sacrifices made by. Since the plane landed on the land of France, we felt a special feeling and ancient historical relations that link us to France, which is hundreds of years old, indicating that the French people are a good people and full of culture, knowledge and love for others. The prime minister stressed that this is a fact that requires continuous cooperation not only between Iraq and France, but between all countries of the world. He pointed out that the unity among the countries of the world is the one who helped to achieve victory over ISIS and if we give it up, we will give ISIS the opportunity to do more murder and crimes.