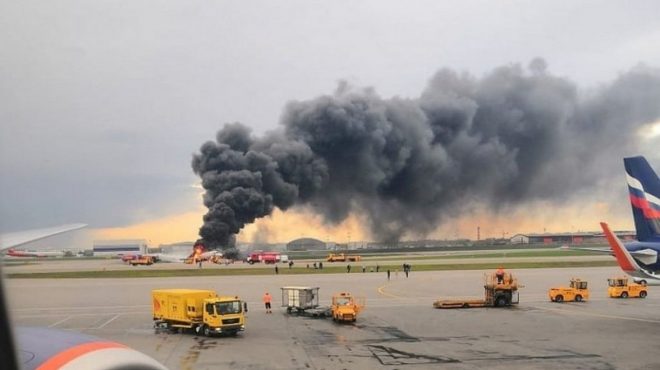 Passengers and crew on board a jet that was forced to make an emergency landing at a Moscow airport say it was struck by lightning moments before it crashed.

Reports of the strike came as survivors told how they escaped the Aeroflot jet which burst into flames on landing at Sheremetyevo airport on Sunday.

Forty-one of the 78 people on board were killed in the accident.

Investigators probing the cause of the crash have made no official comment on the claims it was hit by lightning.

Modern aircraft are built to withstand lightning strikes, and Russia’s national carrier has said only that the plane returned to the airport for “technical reasons”.

However passengers said the plane, which was heading for the northern Russian city of Murmansk, was struck just after take-off.

Some of the five crew members also said lightning appeared to be responsible for a loss of communication with air traffic control.

Dramatic video showed the plane making a very bumpy landing, bursting into flames after bouncing on the tarmac.

Two children and a flight attendant are among the dead. The acting governor of Murmansk, Andrey Chibis, said in a Facebook post that 26 of the victims were from his region.

The plane’s so-called black boxes – which record flight data and cockpit conversations – have reportedly been retrieved and handed to investigators.