US orders departure of non-emergency employees from Iraq.

A U.S. flag flies in front of the Chancellery building inside the compound of the U.S. embassy in Baghdad December 14, 2011. The compound, located in Baghdad's Green Zone, will be the home for thousands of American citizens left after the U.S. military completes its withdrawal this month. REUTERS/Lucas Jackson (IRAQ - Tags: POLITICS CONFLICT MILITARY SOCIETY) - RTR2V83I

The US State Department has ordered the departure of non-emergency government employees from Iraq, following Washington’s repeated expressions of concern about so-called threats.

The State Department ordered the pullout of the employees from both the US Embassy in Baghdad and its consulate in Erbil, the embassy said in a statement on Wednesday.

“Normal visa services at both posts will be temporarily suspended,” it said, recommending that those affected depart as soon as possible.

“The US government has limited ability to provide emergency services to US citizens in Iraq,” it added.

It was unclear how many staff members would leave. 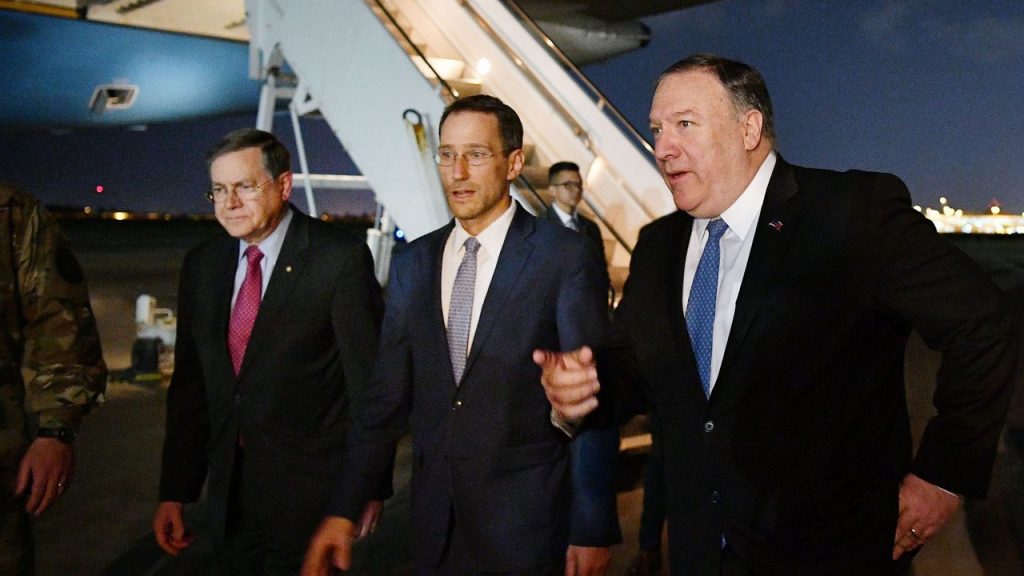 US Secretary of State Mike Pompeo made an unannounced trip to Iraq on Tuesday, pressing Iraqi leaders about what he alleged were the increased dangers to Americans.

Despite this, the British general overseeing the so-called US-led coalition forces in Syria and Iraq has asserted that there has been “no increased threat from Iran” amid the US military buildup in the Persian Gulf.

Iraqi Prime Minister Adel Abdul-Mahdi said on Tuesday he was getting indications from talks with both the United States and Iran that “things will end well” despite the rhetoric.

The administration of US President Donald Trump has been ratcheting up economic and military pressure on Iran.

The US has deployed a carrier strike group and a bomber task force to the Middle East to confront what the Trump administration claims are “clear indications” of threats from Iran.