“Honor to Mussolini”: Fascist symbols and rhetoric on rise in Italian EU vote

A banner emblazoned with the words “Honor to Mussolini,” unfurled just steps from the Milan piazza where the fascist dictator’s body was hung upside down after his 1945 execution. One-armed salutes and fascist slogans shouted at protests. Italy’s right-wing interior minister skipping commemorations for the 74th anniversary of the country’s liberation from Nazi occupation.

Fascist symbols, rhetoric, and salutes — long a public taboo — have made their way out of the hooligan sections of soccer stadiums and into Italian streets in the run-up to this week’s European Parliament elections.

The leader of the right-wing party leading in the Italian polls, Interior Minister Matteo Salvini, has faced criticism for perceived complacency toward neo-fascist extremists in his bid to see his once regionally based League party finish No. 1 in Italy, and perhaps Europe when Italians vote Sunday.

Salvini, who has attracted the admiration of European far-right leaders for his anti-immigrant, anti-Islam stances, makes a show of dismissing extremist labels and the existence of fascist ideology on the Italian political spectrum.

“In this piazza, there are no extremists. There are no racists. There are no fascists,” Salvini declared to a crowd of thousands gathered last weekend for a campaign rally of European populists, including far-right leaders from France and Germany. 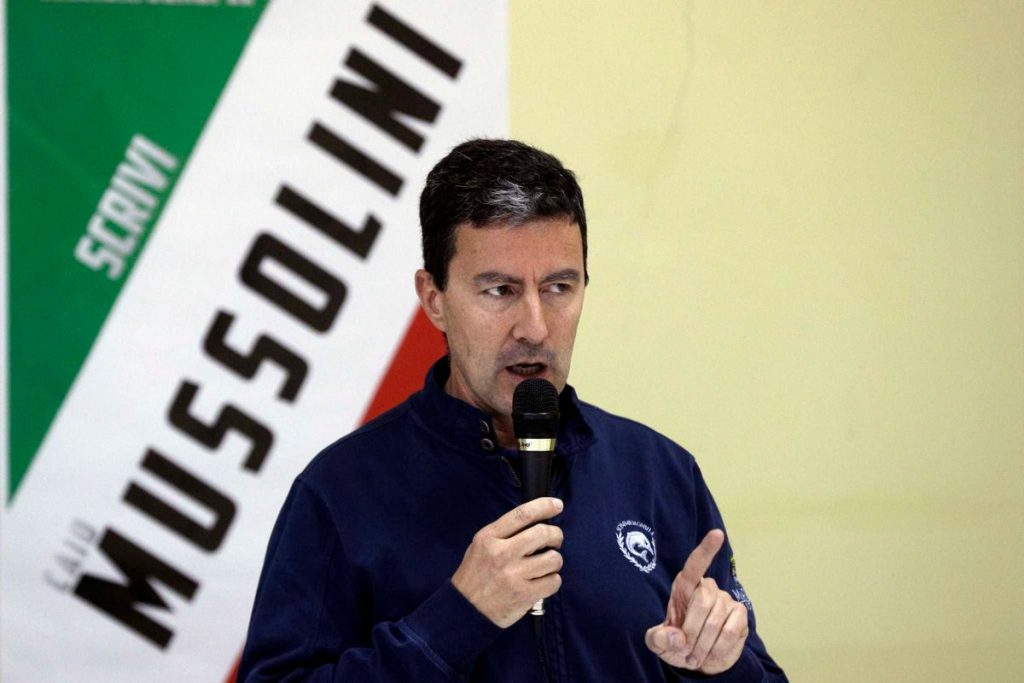 But his words belie the resurgence of neo-fascist groups emboldened on the sidelines of a European election campaign that is shaping up into a contest between Europe’s traditional political powerhouses and eurosceptic right-wing populists campaigning to restore control over a range of issues to the EU’s 28 member states. And many are putting at least part of the blame on Salvini for underplaying or even appearing to encourage Italy’s fringe extremist parties and their antics.

Just a day earlier, Salvini had dismissed the unfurling of the “Honor Mussolini” banner in Milan by dozens of “ultra” fans from Rome’s Lazio soccer team — known for their neo-fascist allegiances — as just the work of “idiots.”

And at protests last month, far-right activists were emboldened to shout fascist slogans and raise one-armed salutes over the placement of Roma families — a minority persecuted during World War II — in public housing in the Italian capital. Critics noted the extremists had received a permit from law enforcement, which falls under the direction of Salvini. Salvini himself has tweeted photographs of Roma dwellings being torn down.

Guido Calderon, an expert on right-wing Italian groups, says that Salvini has been courting the far-right for years, melding their extremist rhetoric with his League party’s xenophobic platform targeting immigrants. This allows Salvini to appeal to more extremist voters while maintaining the party’s traditional base, he said.

Polls show a growing concern among Italians that fascism, officially banned as a political movement in Italy but never expunged from popular culture or the political fringe, is rearing its head in alarming ways. The SWG polling agency says 71% of Italians believe it is important to combat the return of Nazi and fascist ideology, up from 65% just two years ago, while two-thirds believe it is important to repress those who incite fascism, up from 60 percent in 2017. 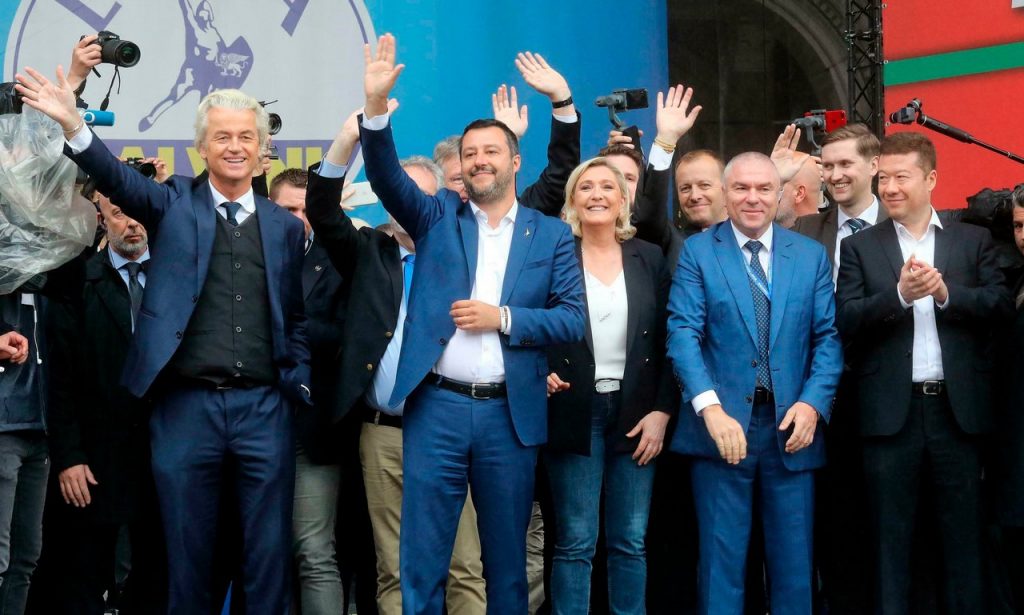 But Calderon said “another part of the population is attracted” to fascism. And that, he said, is because Italians have never fully dealt with their fascist past.

Still, neither of Italy’s main right-wing extreme parties, Forza Nuova or CasaPound, is expected to get anywhere near the threshold to enter Europe’s parliament in the Sunday vote.

Mussolini was in power for nearly two decades before Italy entered WWII, a period of modernization during which the fascist regime built schools, railroad stations and administrative buildings that remain in public use today. Many monuments and symbols glorifying Mussolini’s rule were removed following the war, but a surprising number remain in plain view, reflecting Italy’s complicated relationship with its 20th-century history.

Rome’s Foro Italico sports complex on the western bank of the Tiber river is one of the most striking examples, with pavement mosaics paying homage to the fascist dictator and a marble obelisk that bears his name. In the nearby headquarters of the Italian Olympic Committee, news conferences are still held in front of a mural showing Mussolini on a pedestal addressing a crowd. Calendars featuring the late dictator pop up in newsstands and his framed image can be spied behind bars in northern Italy.

Salvini, recognizing the power of Mussolini’s image, recently addressed a European election rally in the northern city of Forli from a balcony once used by the fascist dictator.

And Mussolini’s name remains part of the political discourse, first with lawmaker Alessandra Mussolini, Benito Mussolini’s granddaughter who started out with a now-defunct neo-fascist party, and now with his great-grandson, Caio Giulio Cesare Mussolini, who is running with the far-right Brothers of Italy party in the European elections.

Many commentators dismiss his candidacy as a publicity stunt for the tiny Brothers of Italy. Still, he recognizes the strength of the family name, making #scrivimussolini, — or #writeinmussolini — a campaign motto, because, he said on Twitter, “Many want to write Mussolini on the ballot.”

“I continue to meet people from that period who have memories that are more than satisfying,” Mussolini told The Associated Press. “I met a 95-year-old person who had a version of that period very different from the one you find in public opinion.”

Italy’s fraught history came to the forefront again this week when a high school teacher was placed on two-week’s unpaid leave after her 14-year-old students completed a project that likened Salvini’s security decree cracking down on illegal immigration to Mussolini’s 1938 racial laws targeting Jews. The disciplinary action by provincial school officials was widely criticized as anti-democratic and against freedom of instruction and speech in the classroom.

“That someone can compare the interior minister, Matteo Salvini, like him or not, to Mussolini or even Italy and the security decree with extermination camps is crazy, truly crazy,” Salvini said.