Two people, including an 11-year-old girl, were killed and 17 other children hurt in a stabbing spree in Japan on Tuesday — a rare act of public violence in a country considered one of the safest in the world.

The attack took place near a park in the city of Kawasaki, about 13 miles (21 kilometers) from Tokyo, authorities said. The children were waiting for the bus to the nearby Caritas Elementary School, according to the school’s director Tetsuro Saito.

Saito said that the students were standing in two lines when the school’s vice principal, Satoru Shitori, who was helping students get on the bus, witnessed a man holding two knives stabbing children one after another while running.

Kawasaki Police said a total of 19 people were injured, including the two victims who died. Police have named the girl who was killed as Hanako Kuribayashi. Her age was previously given as 12 by a spokesperson at Nippon Medical School Musashi Kosugi Hospital.

The adult male victim, 39-year-old Satoshi Oyama, was a father of a 1st-grade student at Caritas Elementary School and a government employee. It is not clear if Oyama’s child was hurt in the incident.

All 17 children who were stabbed were girls, most of whom were lower elementary students, according to Saito.

“Innocent students who are raised with love by their parents (have fallen) victim to the pathetic incident. I’m suffering from unfocused anger and from (the) deepest regret,” Saito said.

The suspected attacker, 51, also died from a “self-inflicted wound,” Japanese public broadcaster NHK reported. Police officers previously told NHK that the man had stabbed himself in the neck. 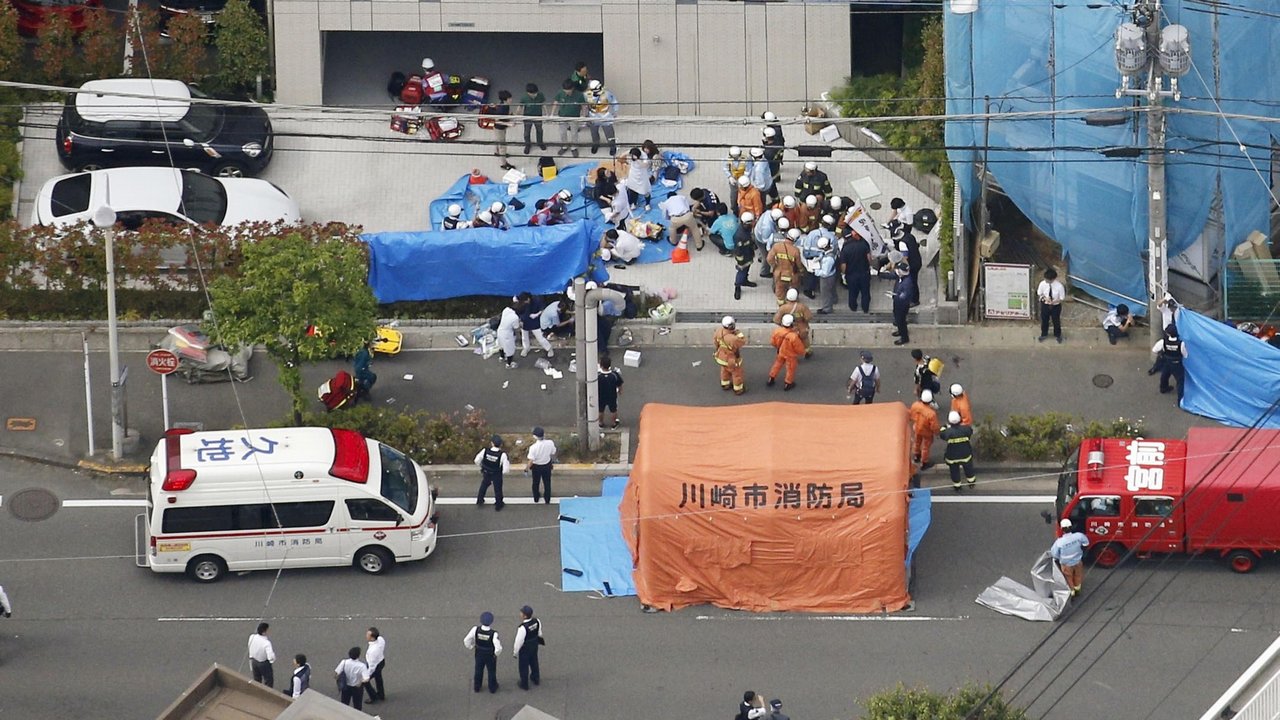 “We must keep our children safe at all costs,” Abe told reporters. “I’ve instructed the related ministers to take immediate action to ensure the children’s safety in going to and leaving school.”

NHK reported earlier Tuesday that three people — including an elementary school student — were in critical condition. It’s unclear if the girl who died was among them.

At a Tuesday press conference, Saito said that the school will remain closed until Friday and that the children had not been told about the death of their classmates yet.

The school will boost security with additional security guards and will increase the number of counselors who can provide students and parents with psychological support, he added.

Mass stabbings are extremely rare in Japan. In 2016, 19 people were killed in a stabbing spree at a care home for disabled people — the deadliest mass killing in Japan since the end of World War II.

Japan also strictly regulates weapons, and it’s illegal for people to carry a pocket knife, craft knife, hunting knife or box cutter in public, according to the US State Department.