Opinion | France elections 2022: Whoever wins, anti-Muslim persecution is the victor

French President Emmanuel Macron and his challenger, Marine Le Pen, have qualified for the final round of the election, echoing their 2017 duel. French Muslims, many of whom had backed the defeated left-wing candidate, Jean-Luc Melenchon, are now anxious about what the future holds. This election will likely have lasting repercussions for the French Muslim community.

For all their points of distinction, the two opposing candidates show remarkable uniformity in addressing Islam and the “Muslim problem”. After his election in 2017, Macron wasted no time in targeting and policing the French Muslim minority. He has applied maximum pressure on Muslim civil society members, making their daily work intolerably difficult and tightening the state’s stranglehold on their religious practices.

Services created and used by the French Muslim community were effectively dissolved overnight by ministerial decree. More than 718 mosques, Islamic schools and Muslim-run organisations have been closed, after more than 24,000 establishments were investigated and €46 million ($50m) in funds seized from an already economically deprived minority.

This policy of state-sponsored anti-Muslim persecution is wilfully obscured from international view. If re-elected, Macron would continue and expand this policy, and it is only natural to assume that Le Pen would do the same. Both regard the Islamic faith and its visible practices as “civilizational threats”, holding the view that “Islamist separatism” must be categorically opposed. Macron’s interior minister has even labelled Le Pen’s approach to Islam as “soft”.

If it appears the far-right reaches greater Islamophobic heights than the political centre in France, it is likely just a matter of time before such divergence erodes.

Admittedly, Le Pen has gone further than Macron in suggesting a prohibition on the wearing of the hijab, but Macron has staunchly criticised it for years, and his institutionalisation of anti-Muslim persecution can only foster pessimism for the future.

If re-elected, Macron would likely find inspiration in Le Pen’s bold, yet normalised Islamophobic propositions. The sad reality for France’s Muslim citizens is that both candidates would bring aggressively Islamophobic governance, with little nuance.

No matter the outcome at the ballot box, anti-Muslim persecution has already won.

The two parties that long dominated France’s political establishment – the Socialists and Republicans – suffered crushing defeats in this month’s vote, pulling numbers in the single digits. They have clearly been replaced by the political forces of Macron and Le Pen, whose Islamophobic views have been fostered by two decades of the “war on terror” and a common fear of France’s decline on the world stage.

Old political approaches needed to be renewed, and it was no surprise that key political figures from the En Marche and National Rally parties came of age with the advent of the war on terror. France’s past colonial imperialism, far from being rejected, simply required a generational update. 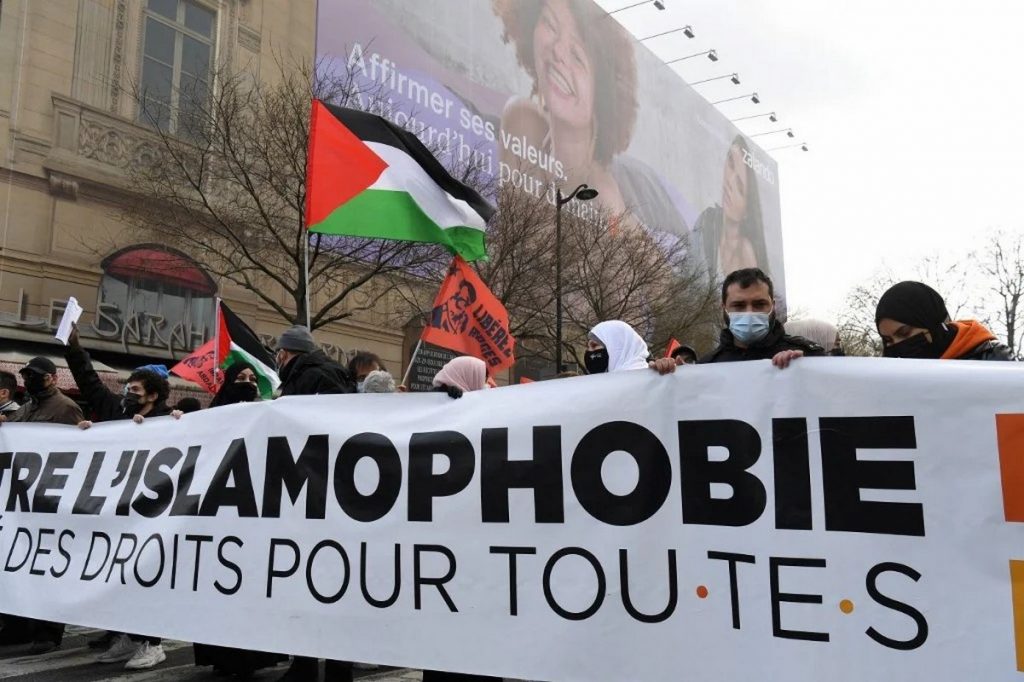 Though it might have initially appeared as though France was in the backseat of this two-decade war on Islam, despite being fertile ground for anti-Muslim bigotry due to its anti-religious culture and principle of laicite, its colonial past inevitably pushed through.

Through its Islamophobic persecution and a reinvigorated imperialistic will to lead Europe, France has now become a leading figure in the war on terror.

And yet, France’s ambition is greater than itself. The nation has already taken steps to entice its European counterparts to follow suit on its anti-Muslim policies.

With France currently holding the rotating EU presidency, Macron has used this platform to depict the country’s anti-Muslim governance as an efficient way to prevent terrorism, and has even pushed the EU to adopt a joint security strategy modelled on France’s vision.

As a direct consequence of this increasingly oppressive environment, more and more French Muslims are leaving the country. This is understandable, but with millions of Muslims in France, it is not a viable solution for everyone. What, then, will become of those who remain on French soil?

As French Muslims have been consistently failed by electoral politics, many feel the ballot box is no longer a viable political solution. As the domestic situation grows more dire, the spiritual, psychological and political effects of this persecution are firmly taking root.

On the international stage, Muslims and their allies must firmly oppose France’s Islamophobic bigotry.

The views expressed in this article belong to the author and do not necessarily reflect the editorial policy of Alghadeer News.

By | Rayan Freschi, a CAGE researcher based in France. He authored CAGE’s report “We are beginning to spread Terror” which unveils the existence of state-led anti-Muslim persecution in France.