Trump kicks off a controversial visit to the UK.

US President Donald Trump has arrived in the UK on a trip overshadowed by public outrage and plans for massive protests across the country.

Trump and his wife, Melania, arrived in the capital London on Monday for the three-day state visit during which he will attend a banquet hosted by Queen Elizabeth II and meet outgoing Prime Minister Theresa May.

UK Foreign Secretary Jeremy Hunt greeted Trump and his wife as they walked on the red carpet to board a helicopter that would take them to the palace for an official welcome ceremony attended by the Royal family.

Hundreds of thousands of Britons have pledged to paralyze London during Trump’s stay. They will greet the US president with a giant orange baby blimp and a robotic version of him throughout his stay in the country.

Trump’s visit has also been met with massive criticism among senior British politicians, who do think the American head of state is not worthy of a state visit on an invitation from the queen.

Trump is expected to receive a cold welcome from some members of the Royal family because of his offensive remarks about the late Princess Diana as well as Meghan Markle, Duchess of Edit itemSussex, whom he recently referred to as “nasty.”

The US president will receive a ceremonial welcome at Buckingham Palace from the queen.

On Monday, the queen will give a state banquet at Buckingham Palace. Both Trump and the monarch are expected to make a speech at the event.

Trump will hold a meeting and a press conference with May on Tuesday. The meeting is said to be about future trade between the US and a post-Brexit Britain.

Trump will conclude his trip on Wednesday. 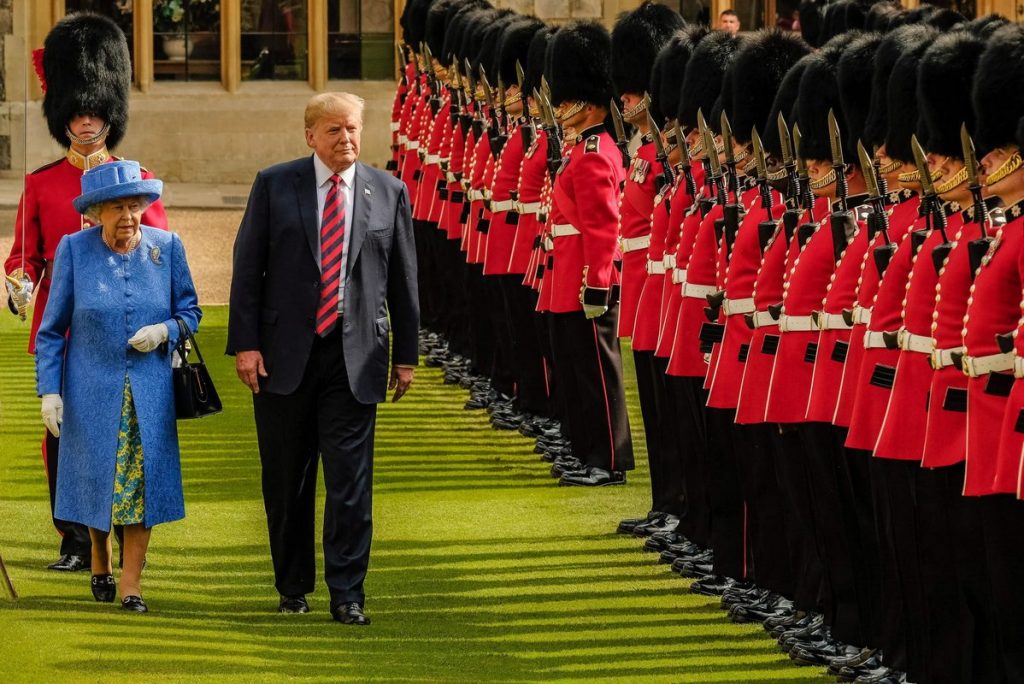 Prior to boarding Air Force One, Trump barked at a reporter who asked him whether it was appropriate for him to comment on British leadership and the country’s internal affairs, referring to the US president’s remarks earlier that the UK should just “walk away” from negotiations with the European Union and leave the bloc without an agreement.

“Well, people ask me questions, like you, you’re asking me a question,’ he barked. ‘Don’t ask me the question if you don’t want me to talk about it.”

Trump has backed Boris Johnson, former London mayor, and foreign minister, as his preferred candidate to replace May. Johnson is viewed in most polls as the favorite to take the job.

The comments have drawn fire from various UK politicians.

Mel Stride, the newly appointed Commons leader, said he was surprised by Trump’s remarks and that the US president would not be picking the next British prime minister.

“The next prime minister should be chosen not by the US president, nor by 100,000 unrepresentative Conservative party members, but by the British people in a general election,” he said.

Jo Swinson, deputy leader of the Liberal Democrats, said, “It shouldn’t come as a surprise that Donald Trump backs Boris, they’re cut from the same cloth,” she added.

Swinson noted that “they’re both unqualified to lead, both revel in offending people and both represent the strain of nationalism and populism that we need a liberal movement to stand up to.”

Due to widespread protests, Trump is to receive what some outlets have called a bare minimum visit.

Citing unnamed sources, the Washington Examiner reported that the American head of state would miss out on “the usual welcome in Horse Guards Parade, the grand parade ground in central London where visiting heads of state are usually invited to inspect the honor guard with the queen before a carriage procession to Buckingham Palace.”

The visit and its ceremonies are in many ways similar to former President George W. Bush’s trip to the UK in 2003, which was also met with protests.

The American head of state has not been invited to make a speech at the UK parliament either.