Champions League: Which team is under the most pressure to win this season’s competition?

Barcelona have not lifted the Champions League trophy since 2015 while the prize has eluded both Paris Saint-Germain and Manchester City despite heavy investment; Can anyone stop holders Real Madrid?

Holders Real Madrid will launch their Champions League defence in Glasgow when this season’s group stage gets underway on Tuesday evening.

Real have won five of the last nine editions and, under the wily Carlo Ancelotti, are likely to be one of the teams to beat again.

Having beaten Liverpool at the Parc des Princes last May, Ancelotti goes in search of a fifth title as a manager.

Madrid face Scottish champions Celtic in their opening Group F fixture while on the same night Paris Saint-Germain and Manchester City set out on their latest quest to lift European club football’s biggest prize for the first time.

With a look at some of the talking points ahead of the long road to Istanbul, Sky Sports reflects on which team is feeling the most pressure to deliver on Europe’s biggest stage… 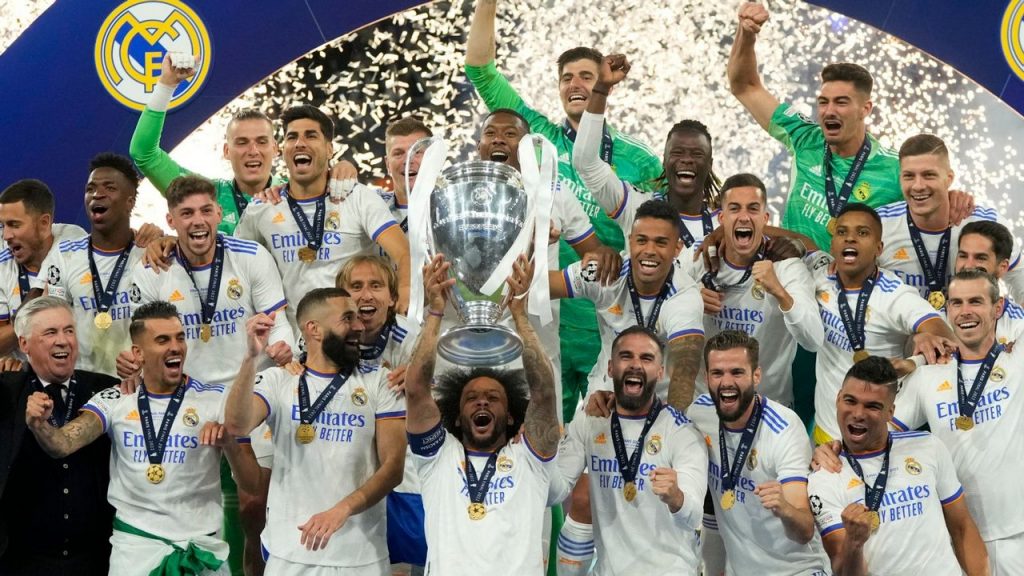 Holders Real Madrid have made a strong start in La Liga, winning all four of their matches – beating Real Betis 2-1 in their most recent encounter.

“They’ve taken four wins from four, the only team in La Liga to have picked up 12 points so far. On top of that, they’ve already picked up a piece of silverware at the start of the campaign so really, it’s five from five.

“They’re just really difficult to beat. Ancelotti always seems to have a Plan B and a Plan C up his sleeve when something isn’t working in a game.

“He knows how to change it, he’s really good at reading the in-game situation. In the last couple of fixtures, his substitutions have been spot on in terms of swaying matches in their favour.

“If there was a slight weakness – but it is only slight – is that in the past two games, Karim Benzema has looked slightly off it. But having said that, he still scored a brace the other day.

“So it’s going to be very difficult to find a way of getting through this Real Madrid side. They’re scoring goals and they’re keeping clean sheets as well. It’s very difficult for opponents to find any cracks in their armour.

“It’s going to be a very tough game for Celtic, even though they’re going to be playing at home.”

How have Real adapted to life without Casemiro? 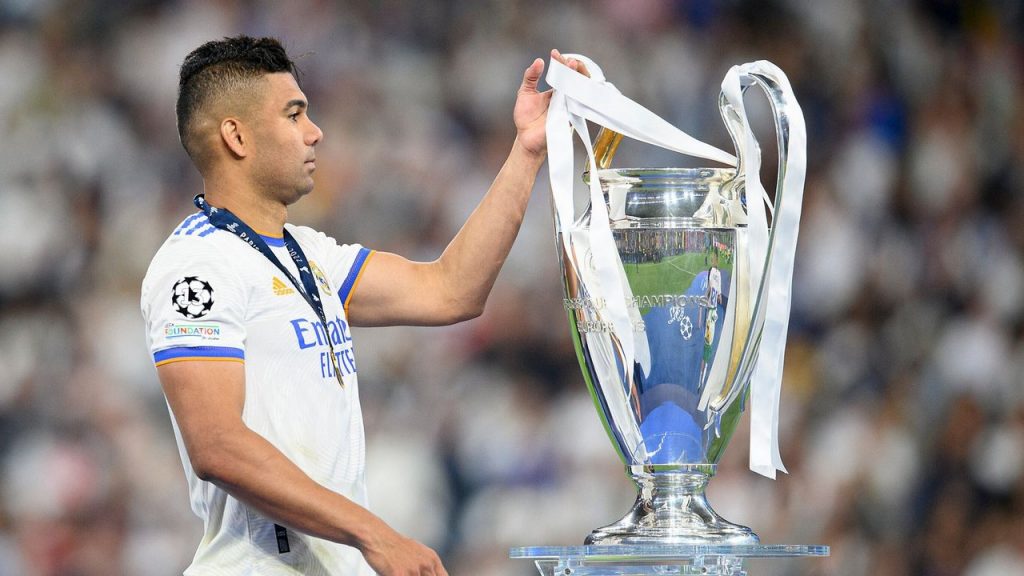 Real’s run to the final last season was a tale of resilience and adapting in the face of adversity.

They were heading out at the last-16 stage when Benzema’s 15-minute hat-trick stunned PSG, there was the comeback win over Chelsea followed by a bizarre stoppage-time recovery to knock out Manchester City in the semi-finals.

Casemiro was allowed to join Manchester United in the summer, but his departure has been absorbed. Real have adapted again.

“They’ve done exceptionally well and did their business very early in the window,” Hunter continues. “They brought in Aurelien Tchouameni from Monaco, spending €80m on him.

“The idea was that progressively over the next few years they would ease him into the position as they transitioned Casemiro out. But obviously, that hasn’t happened.

“He’s had to hit the ground running and he’s been thrown into the deep end with Casemiro deciding to leave. He’s done a great job over the last few games. At first, he was a little bit nervous but he’s been shaking off the nerves, growing in confidence and making the role his own.”

Could this be the year for Man City? 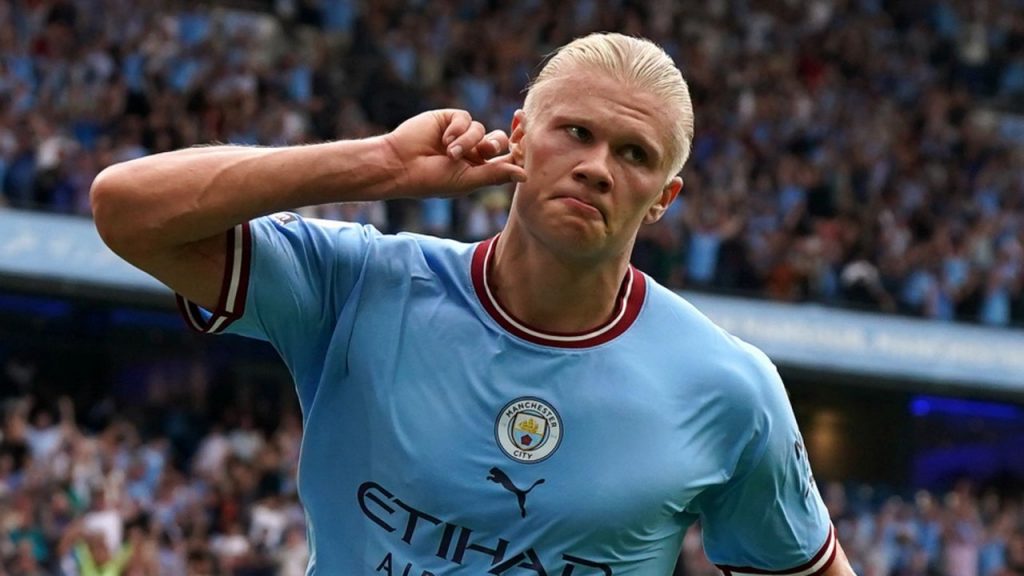 Madrid’s 14th European Cup brought into ever sharper focus the ongoing wait for glory at Manchester City, who are competing in the Champions League for a 12th season – all coming in a row since 2011/12.

Only Real (26), Barcelona (19) and Bayern Munich (15) are on longer ongoing runs of consecutive appearances in the competition, and they should find negotiating Group G easier than it appears on the surface – not least because they have directly weakened one of their opponents.

City’s hand has been strengthened significantly by the summer addition of £51m striker Erling Haaland. The Norway international has an outstanding record in European club competitions, having scored 27 goals in 25 appearances for Molde, Red Bull Salzburg and Borussia Dortmund

In his opening six games in the Premier League, Haaland has plundered 10 goals, including back-to-back hat-tricks against Crystal Palace and Nottingham Forest. History suggests the flow of goals is unlikely to dry up as Pep Guardiola’s men prepare to open their campaign at Sevilla.

He scored three times on his Champions League debut for Salzburg against Genk in September 2019, and helped himself to a double against PSG in his first appearance in the competition for Dortmund in the February of the following year.

Champions League success has eluded City, but Haaland’s arrival will ramp up the pressure on Guardiola to take his side to a second final this time around, and go one better than they did in 2021 when Chelsea overcame them in Porto.

Will Sevilla provide a strong test for City? 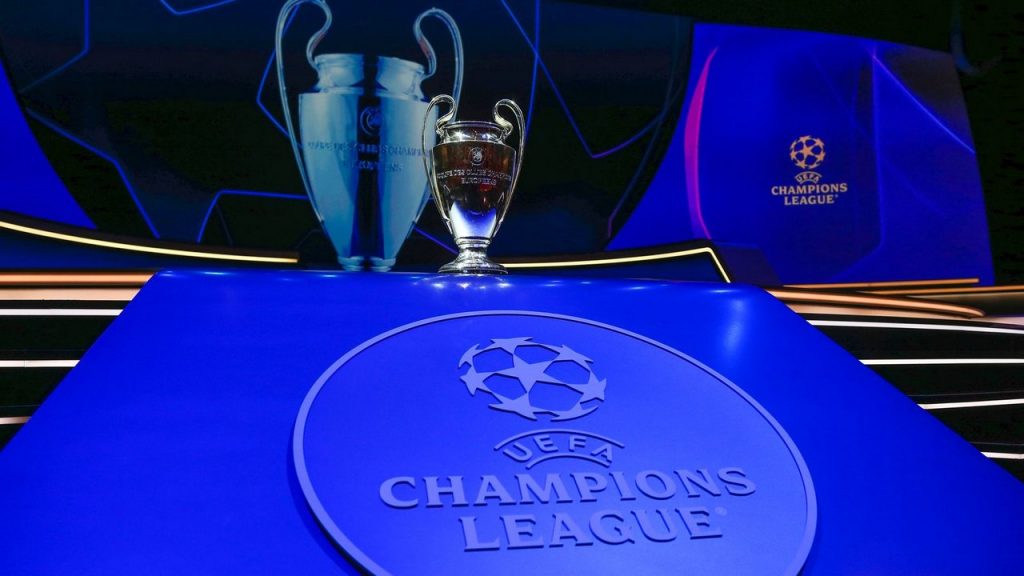 “City can expect all kinds of weaknesses,” Hunter said of Guardiola’s first opponents in Group G on Tuesday. “Unfortunately for Sevilla, they’ve had a terrible start to the campaign. It’s been their joint-worst start ever in the club’s history. Equal with one other time 40 years ago.

“They’ve only picked up one point and they’ve only scored three goals. They’ve conceded eight and the reason that’s important is that last season, Sevilla boasted the best defensive record.

“Hardly anyone could get a goal against them. It took them 14 matchdays to concede nine and they’ve already conceded eight in four. There’s all kinds of issues to be sorted out but they are a selling club. They’ve sold a lot of players and they’ve completely lost the heart of their defence in Jules Kounde and Diego Carlos.

“The two players who have come in -Tanguy Nianzou and Marcão – have both had some issues settling. Marcão has been injured.

“There have been a lot of gaps and holes all over the place that manager Julen Lopetegui has been trying to fill. He’s rotated his squad and six new players came in during the recent defeat to Barcelona.

“They started the game well, they were more dominant and were in control but once they conceded that first goal, they crumbled. Their attitude isn’t right, there’s a lot of things going wrong right now.

“They still don’t have a proper goalscorer, which is an issue they carried over from last season. There’s a lot of pressure on Lopetegui and if things don’t go their way in the Champions League – which against Manchester City, it probably won’t – he may have his last game in charge. I can see City winning with relative ease.” 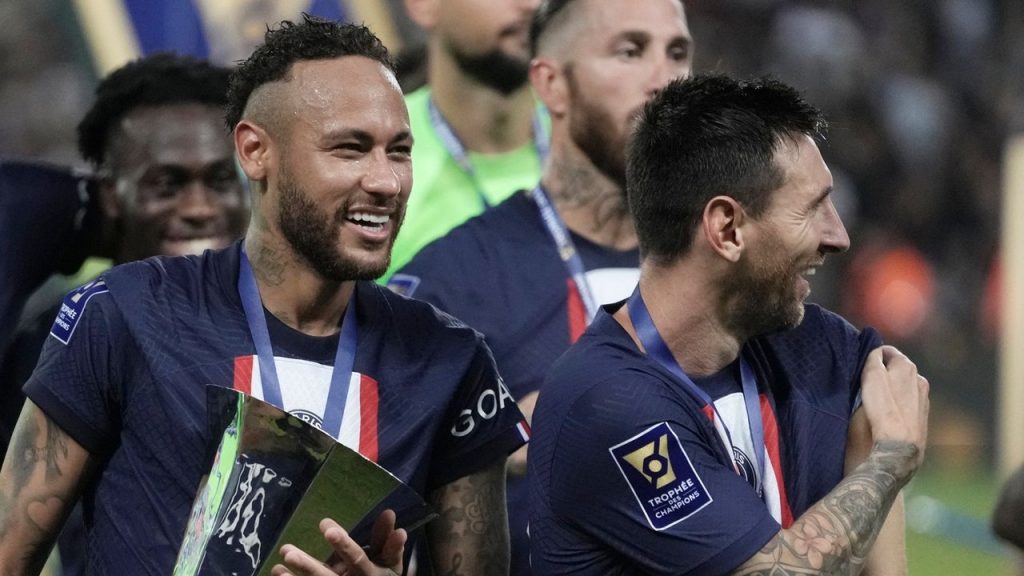 Paris Saint-Germain, like City, have invested heavily in their pursuit of the biggest prize of all, but despite their domestic dominance and final appearance in 2020 – falling to a narrow defeat at the hands of Bayern Munich – the yearning remains unrequited.

If PSG prosper this season, Lionel Messi will have a major personal landmark in his sights. The 35-year-old has 125 Champions League goals to his name to date, 15 fewer than Cristiano Ronaldo at the top of the pile.

However, Ronaldo will not add to his tally with Manchester United having qualified only for the Europa League, handing Messi a chance to close the gap. 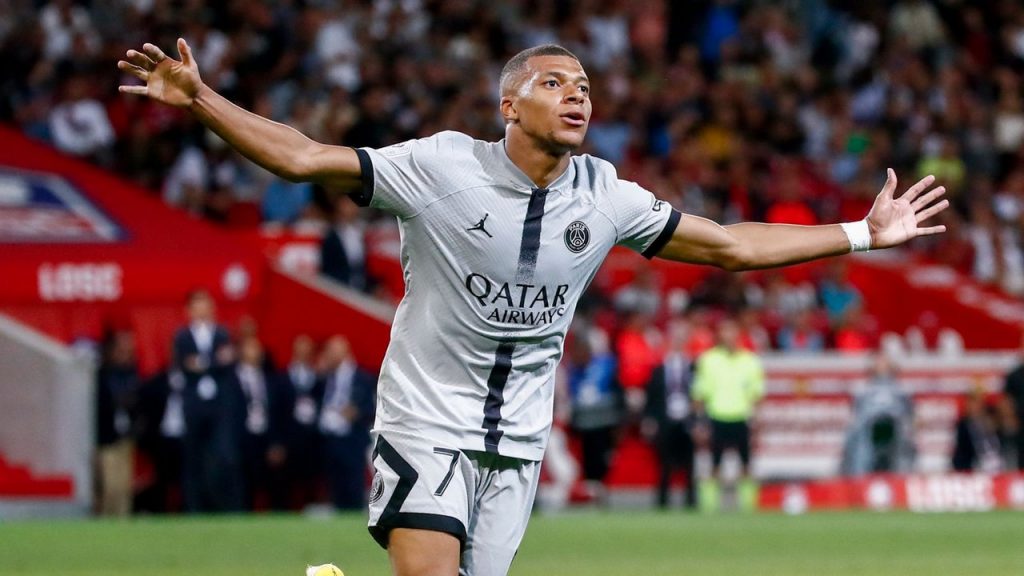 Barcelona’s Robert Lewandowski and Real Madrid star Karim Benzema are next in line on 86.

While Mauricio Pochettino would rarely replace Messi, Kylian Mbappe, or Neymar, his successor Christophe Galtier didn’t hesitate to put the Brazilian on the bench on Saturday against Nantes, three days before their Champions League opener against Juventus.

Galtier had warned the team would come first, and he has been true to his word as PSG scored a record 24 goals in their opening six league matches.

“I talked about it twice – once with each of them and once with the whole squad, to tell them that this is how it was going to be and that we had to have the right attitude and accept it,” said Galtier, who knows failure to qualify from a group containing Juventus, Benfica, and Maccabi Haifa is unthinkable. 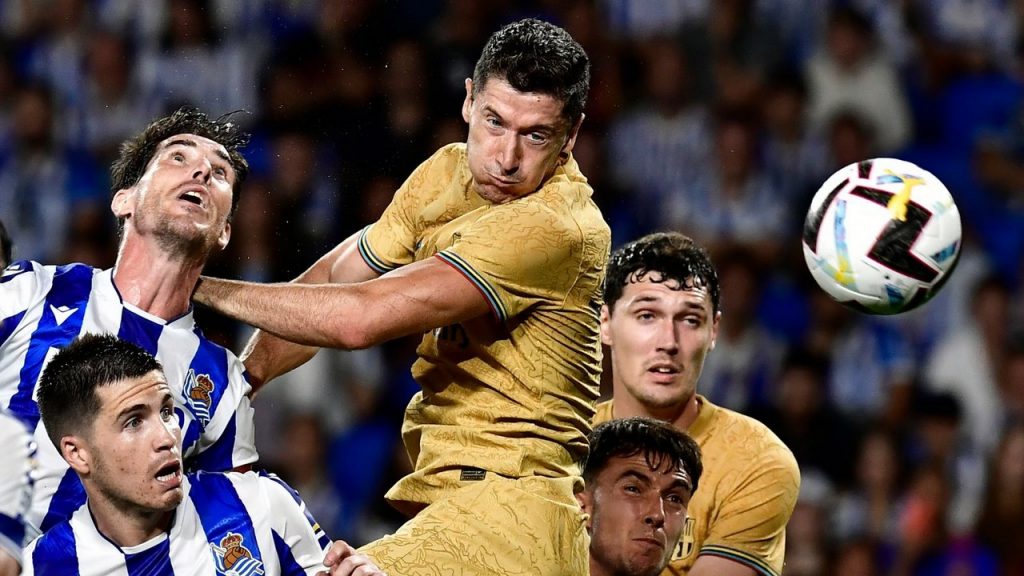 Barcelona have not won the competition since 2015 and failed to progress beyond the group stages for the first time since 2000/01 last season.

Having slipped into the Europa League, the Catalans reached their nadir when they were beaten by eventual winners Frankfurt in the quarter-finals amid farcical scenes at the Camp Nou where 30,000 visiting fans made it feel more like a home game for the Bundesliga outfit.

But Barcelona – who start their campaign with a home game against Czech side Viktoria Plzen on Wednesday – have been boosted by a huge summer overhaul spearheaded by the arrival – and instant impact – of Robert Lewandowski.

Hunter said: “Lewandowski has scored five goals in four games so he’s settled in brilliantly. It’s been what every Barcelona fan was hoping to see. Xavi has been raving about him and everything that he brings to this team. It’s not just the goals – it’s everything else.

“It’s the experience, it’s the championship mentality, the leadership, and the natural quality that he oozes and offers to everyone else. He raises everyone’s game.

“He’s been working really well alongside Ousmane Dembele and Raphinha, who have been providing goals and assists themselves.

“Lewandowski has so much service also from Pedri, Gavi, and Ansu Fati on the flank. You can see in Lewandowski’s body language that he’s so happy because he knows he’s going to score.”

With Inter Milan completing Group C, expect plenty of fireworks to accompany the many sub-plots.