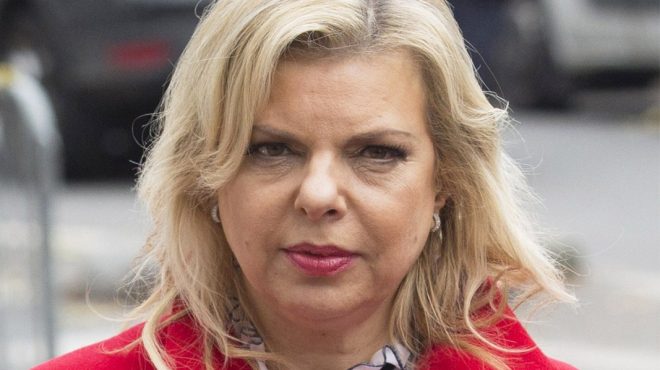 Sara Netanyahu, the wife of Israeli Prime Minister Benjamin Netanyahu, agreed to a plea deal on Wednesday morning in a case concerning illegally ordered meals at the Prime Minister’s residence, according to a statement released by Israel’s Justice Ministry.

Sara Netanyahu, who was initially charged with fraud one year ago, agreed to plead guilty to the lesser charge of taking unfair advantage of a mistake, the Justice Ministry statement said. She will also pay 55,000 shekels (approximately $15,300) — 45,000 shekels back to the state, and 10,000 shekels in the form of a fine.

A spokesman for Israel’s first lady had no comment.

According to an amended indictment sheet, the case involved the ordering of catered meals delivered to the residence worth a total of 175,000 shekels (just under $50,000).

The food was ordered by Sara Netanyahu and Ezra Saidoff, the former manager of the residence, and paid for with state funds.

The orders were illegal under Israeli law because there was a cook employed at the residence at the time, whose job it was to cater to the prime minister, his family, and their guests.

Sara Netanyahu also used state funds to pay waiters to serve the meals on weekends and during private events, according to the initial indictment filed last June.

The hand-picked waiters were registered as “extra manpower” or “cleaners” to hide the fact that they were being illegally employed, the indictment said.

Sara Netanyahu faced a maximum sentence of 8 years in prison. Her lawyers previously slammed the indictment, describing it as “false and hallucinatory”.

“It’s the first time in Israel and in the world that the wife of a leader is put on trial for food entrees,” her legal team said in a statement.

“There was no fraud, no breach of trust or any other felony. The food was not for the Netanyahu family, but for other people, including workers in the residence. We’re certain in the end that justice will speak. Truth and logic will prevail.”

Ezra Saidoff has also reached a plea deal with prosecutors, according to his attorney, Yehoshua Resnick.

A judge is expected to rule on Sara Netanyahu’s plea agreement next week.

Benjamin Netanyahu faces potential charges of bribery and breach of trust in three separate corruption investigations, with Israel’s attorney general calling him for a pre-indictment hearing scheduled for early October.

Netanyahu’s high-powered legal team has sought to delay the hearing and with it the legal process, which could give the long-time Israeli leader enough time to pass an immunity law in the Knesset, effectively shielding him from prosecution.

He has repeatedly denied any wrongdoing, denouncing the investigations as a media-led witch hunt.

The alleged transfers occurred between 2007 and 2016. In exchange for the gifts, investigators say Netanyahu tried to advance a tax break that would have benefited the businessmen.

In another case, known as Case 2000, Mandelblit plans to charge Netanyahu with another count of breach of trust. Case 2000 deals with alleged negotiations between Netanyahu and Arnon “Noni” Mozes, the owner of one of Israel’s largest newspapers, Yedioth Ahronoth.

The attorney general also announced his intention to indict Mozes with bribery. Mozes’ lawyer has said his client is innocent and he expects the cases to be closed without charges being filed.

In another case, known as Case 4000, Netanyahu faces bribery and breach of trust charges. This case is arguably the largest facing the Prime Minister.

It deals with the relationship between Netanyahu and Israeli telecommunications firm Bezeq. Investigators say Netanyahu advanced regulatory benefits worth 1 billion shekels (approximately $280 million) to the company and its primary shareholder, Shaul Elovitch, a friend of Netanyahu.

Along with holding the position of the prime minister, Netanyahu also served as the minister of communications at the time. In exchange for the benefits, the case alleges Netanyahu received favorable news coverage from Walla News!, an online news organization owned by Elovitch.

Mandelblit said he intended to indict Elovitch with bribery, pending a hearing. Like Netanyahu, Elovitch has denied any wrongdoing.