Anti-monarchists: King Charles’ coronation ‘slap in the face for people’ amid high inflation

British anti-monarchists say they have planned a protest for the day of King Charles’ coronation, which is expected to take place amid much pomp and circumstance as the public continue to struggle with high inflation and an unprecedented cost-of-living crisis.

Campaign group Republic, which is a British republican group advocating the replacement of the United Kingdom’s monarchy with a parliamentary republic, made the announcement on Sunday.

The group said it had notified London’s police about its plans for a peaceful demonstration at Parliament Square, which is overlooked by Westminster Abbey where Charles III is to be crowned in May.

“The coronation is a celebration of hereditary power and privilege, it has no place in a modern society,” said Republic’s Chief Executive Graham Smith.

His comment came a day after Buckingham Palace said the coronation would consist of processions, a concert at Windsor Castle, street parties, light shows, and community volunteering throughout May 6-8.

The 74-year-old monarch acceded to the throne in September after his mother Queen Elizabeth died.

Charles is also considered head of state of 14 other realms, including Australia, Canada, Jamaica, New Zealand, and Papua New Guinea.

Smith blasted the event’s astronomical price tag, saying, “At a cost of tens of millions of pounds, this pointless piece of theater is a slap in the face for millions of people struggling with the cost-of-living crisis.”

The inflationary spiral is growing at a much faster pace than the average pay rise across the country.

Many labor unions have launched industrial actions to press the government to enact salary hikes. The government, however, refuses to increase salaries, saying it would increase inflation.

The government blames the economic doldrums partly on the COVID-19 pandemic, saying the country has been having a hard time bouncing back from the stagnation that used to govern the period.

Experts, however, blame leadership incompetence and turbulence that saw the country change several prime ministers over the past two years. 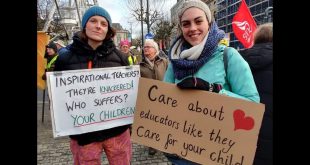