“We intend to overcome the barriers to our exchanges, simplify and modernize the rules and encourage the use of local currencies,” says the text published on the Argentine website Perfil.

“We also decided to advance discussions on a common South American currency that can be used for both financial and commercial flows, reducing costs of operations and our external vulnerability,” the article said.

Earlier in the day, the Financial Times reported the neighboring nations will announce this week that they are starting preparatory work on a common currency.

The plan, set to be discussed at a summit in Buenos Aires this week, will focus on how a new currency, which Brazil suggests calling the “sur” (south), could boost regional trade and reduce reliance on the US dollar, FT reported citing officials.

“There will be . . . a decision to start studying the parameters needed for a common currency, which includes everything from fiscal issues to the size of the economy and the role of central banks,” Argentina’s Economy Minister Sergio Massa told the Financial Times.

“It would be a study of mechanisms for trade integration,” he said, adding, “I don’t want to create any false expectations . . . it’s the first step on a long road, which Latin America must travel.”

The Argentine minister indicated that though initially a bilateral project, the initiative would be offered to other nations in Latin America, adding, “It is Argentina and Brazil inviting the rest of the region.”

Politicians from both countries have discussed the idea already in 2019, but met with pushback from Brazil’s central bank at the time. 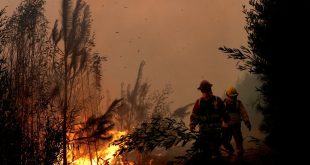 22 dead, hundreds injured in Chile wildfires that continue to spread

As of Saturday morning, there were 251 wildfires raging throughout Chile, 151 of which were …