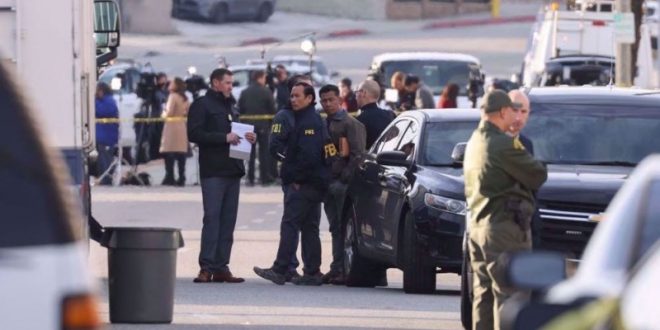 The US police say a man wanted for a mass shooting in California during Lunar New Year celebrations has been found dead in a white van, apparently from a self-inflicted injury.

Los Angeles County Sheriff Robert Luna said on Sunday that police had tracked a wanted van and when officers approached, they heard one gunshot from within the van.

“The suspect sustained a self-inflicted gunshot wound and was pronounced dead at the scene,” Luna said.

He identified the man as 72-year-old Huu Can Tran, saying that no other suspects were at large.

“I can confirm that there are no outstanding suspects from the mass shooting incident,” Luna said, adding the motive for the attack was not yet known.

“The investigation is still ongoing. Sheriff’s homicide detectives are working around the clock gathering additional information and working on determining the motive behind this extremely tragic event,” he said.

The weapon suspected to have been used was identified as a magazine-fed semi-automatic assault pistol, which was also found in the van.

Luna had previously released photos of an Asian man who was believed to be the suspect.

The van was found in Torrance, another community home to many Asian Americans, 34.5 kilometers (about 22 miles) from the site of the shooting.

The manhunt came after the gunman killed 10 people at a ballroom dance studio late Saturday amid Lunar New Years celebrations in the predominantly Asian American community of Monterey Park.

According to authorities, the fatalities included five women and five men, while another 10 people were injured of whom seven remain hospitalized, with at least one person in critical condition.

The suspect likely tried and failed to target a second dance hall.

Luna said 20 to 30 minutes after the shooting in Monterey Park, a man with a gun entered the Lai Lai Ballroom in nearby Alhambra. The suspect entered the Alhambra club with a gun, and people wrested the weapon away from him before he fled, he added.

The massacre was the country’s fifth mass killing this month and was the deadliest attack since May 24, when 21 people were killed at an elementary school in Uvalde, Texas.

Mass shootings are a major concern in the US, as domestic violence and gun violence have also risen during the last year.

The US experienced more than 600 mass shootings in 2022, nearly double the number recorded four years ago when there were 336, according to Washington-based Gun Violence Archive.

The rate of deaths caused by firearms is getting worse as the population of the US goes up. This is while firearm purchases rose to record levels in 2021 and 2022. The changing legal landscape for firearms comes as gun ownership continues to grow across the country.

Analysts see a link between bias-motivated gun violence and a rise in hate groups and toxic discourse in the United States targeting vulnerable, often marginalized population.