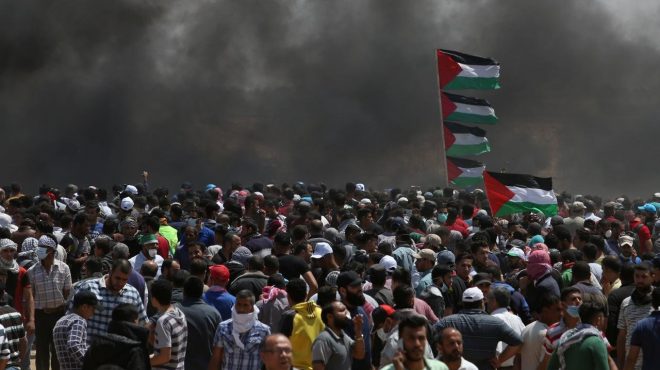 Palestinian demonstrators gather during a protest against U.S. embassy move to Jerusalem and ahead of the 70th anniversary of Nakba, at the Israel-Gaza border in the southern Gaza Strip May 14, 2018. REUTERS/Ibraheem Abu Mustafa

Palestinians in the besieged Gaza Strip have launched a general strike in rejection of the US-led conference in Bahrain, which would seek to advance the economic aspects of President Donald Trump’s controversial proposal for “peace” between the Israeli regime and Palestinians, dubbed “the deal of the century.”

On Tuesday, people stopped going to their workplaces and closed businesses. Public transportation also came to a halt, and most of the public and private institutions, including universities, banks and courts, were shut for the day.

The High Follow-Up Committee of the National and Islamic Forces had called for the action, urging citizens to raise black flags over homes and in their areas.

The Committee said it would hold a national conference at Rashad Shawa Cultural Center in Rimal neighborhood of Gaza City on Tuesday at the same time as the Manama economic workshop is underway. Later in the day, the spokesman for the Gaza Ministry of Health, Ashraf al-Qidra, said in a statement that three civilians had been struck with live bullets near the border between the besieged Gaza Strip and Israeli-occupied territories.

Nine other people suffered from the effects of tear gas fired by Israeli forces.

Another popular conference is scheduled to be held in the eastern flank of the Gaza Strip on Wednesday.

A massive popular march will also take place on the same day from the western gate of the United Nations Relief and Works Agency for Palestine Refugees in the Near East (UNRWA) headquarters to the UN office in Gaza.

Elsewhere in the southern West Bank city of al-Khalil (Hebron), located 30 kilometers (19 miles) south of Jerusalem al-Quds, clashes broke out between a group of Palestinians and Israeli troops.

Palestine’s official WAFA news agency reported that the skirmishes erupted in the Bab a-Zawiya neighborhood of the city, and Israeli military forces fired rubber-coated steel bullets, teargas canisters and stun grenades to disperse the crowd. Tens of the protesters suffered respiratory problems due to inhalation of tear gas. They were treated on the ground.

“The Manama workshop is designed to pave the way for the creation and expansion of an emirate in Gaza, separation of Gaza from the West Bank, and the Judaization of al-Quds (Jerusalem),” he said, emphasizing that any plan that disregards the Palestinian legitimacy is doomed to failure.

Abu Rudeineh went on to say that any unilateral actions aimed at bypassing Arab and international legitimacy will reach an impasse, and that Palestine has not nominated anyone to negotiate on its behalf.

The so-called “Peace to Prosperity” workshop opened in Bahrain on June 25 and will run through June 26.

The Palestinian leadership is boycotting the meeting, leading critics to question the credibility of the event.

The Palestinian Bar Association (PBA) plans to file a lawsuit against participants in the US-led conference in Manama.