France and Ireland say they will not ratify a huge trade deal with South American nations unless Brazil does more to fight fires in the Amazon.

French leader Emmanuel Macron said President Jair Bolsonaro had lied to him about his stance on climate change.

There are currently a record number of fires in the Amazon rainforest – a major source of oxygen for the world.

Environmental groups say the fires are linked to Mr. Bolsonaro’s policies, which he denies.

European leaders have also expressed dismay over the fires, with UK Prime Minister Boris Johnson says he is “deeply concerned” about “the impact of the tragic loss of these precious habitats”.

German Chancellor Angela Merkel has called the fire an “acute emergency… shocking and threatening not only for Brazil and the other affected countries but also for the whole world”.

Mr. Bolsonaro said on Friday that he was considering options for fighting the fires, including deploying the military.

However, he has also accused Mr. Macron of meddling for “political gain”, and previously said calls to discuss the fires at this weekend’s G7 summit in Biarritz, France – which Brazil is not participating in – showed “a misplaced colonialist mindset”. 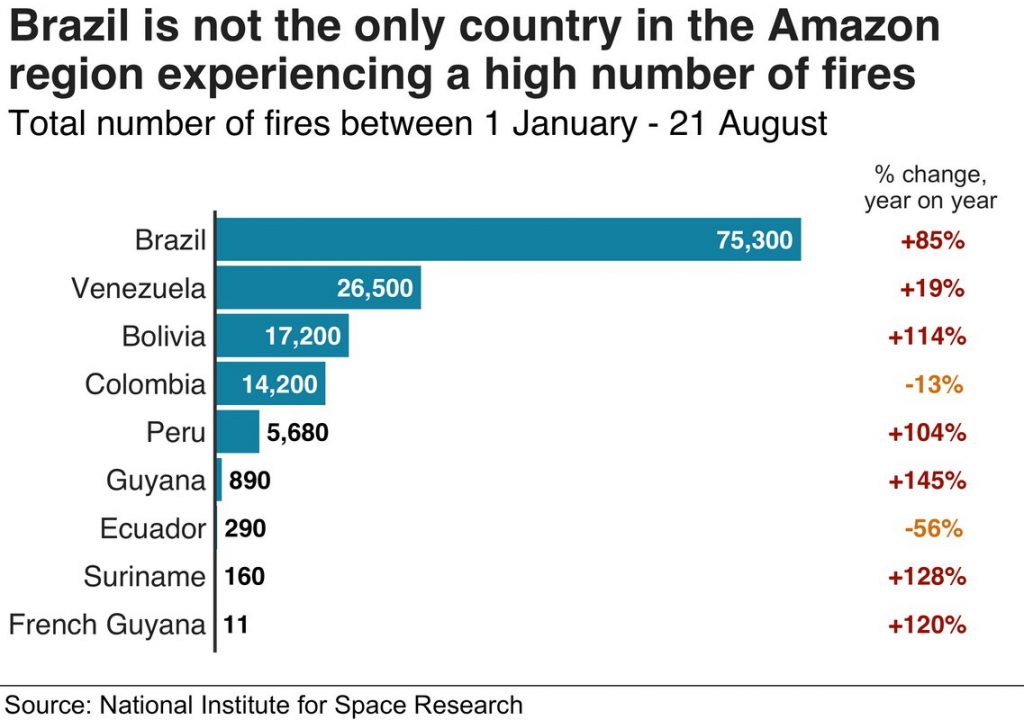 How significant is the trade deal?

Very – the EU-Mercosur trade deal has been described as the EU’s biggest deal to date.

It took 20 years of negotiations to strike the agreement with the South American bloc, consisting of Argentina, Brazil, Uruguay, and Paraguay.

It would cut or remove trade tariffs on both sides, giving EU firms that make industrial products and cars access to Mercosur, and helping Mercosur countries export farm products, including beef, sugar, and poultry, to the EU. 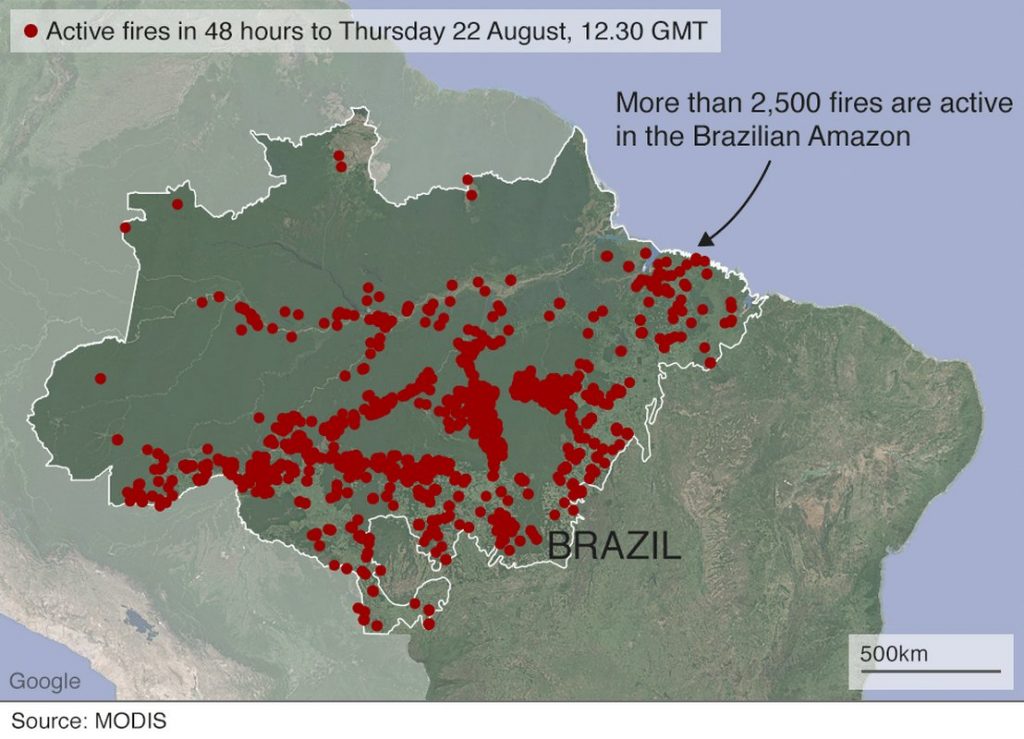 Mr. Bolsonaro is often called the “Trump of the Tropics” because of his unpredictable and brash manners. So it is anyone’s guess whether he will back down or carry on with this stance.

Back in June, he hailed the Mercosur-EU trade deal as “historic” and “one of the most important trade deals of all time”.

Now his own words and actions are threatening the deal – which still needs to be approved by parliaments of all Mercosur and EU countries.

The deal explicitly says countries have to commit to tackling climate change.

But even Mr. Bolsonaro’s agriculture minister and the country’s farmers associations have suggested there needs to be a change of tone from the president. 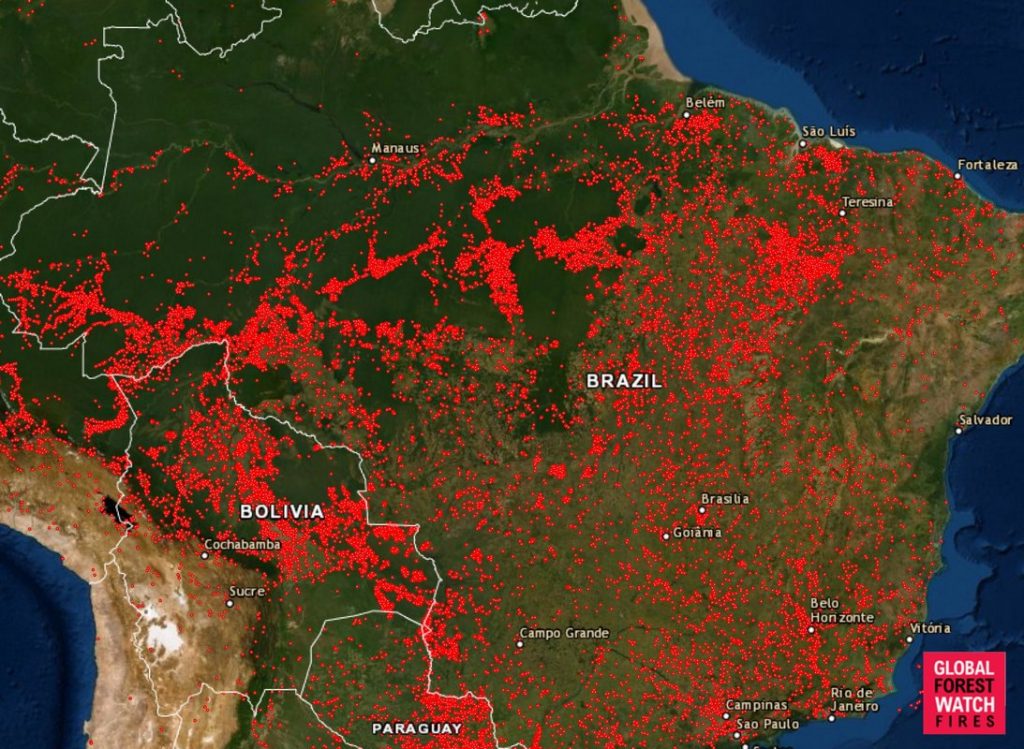 Why does the Amazon matter?

The largest rainforest in the world, the Amazon is a vital carbon store that slows down the pace of global warming.

It is known as the “lungs of the world” and is home to about three million species of plants and animals and one million indigenous people.

UN Secretary-General Antonio Guterres tweeted on Thursday: “In the midst of the global climate crisis, we cannot afford more damage to a major source of oxygen and biodiversity. Amazon must be protected.”

Environmental groups have called for protests in cities across Brazil on Friday to demand action to combat the fires.

Hundreds of protesters also gathered outside the Brazilian embassies in London, Berlin, and Paris.

How bad are the fires and who is responsible for them?

Satellite data published by the National Institute for Space Research (Inpe) has shown an increase of 85% this year in fires across Brazil, most of them in the Amazon region.

Mr. Bolsonaro has brushed off the latest data, arguing that it was the season of the “queimada”, when farmers burn land to clear it before planting.

However, Inpe has noted that the number of fires is not in line with those normally reported during the dry season.

Wildfires often occur in the dry season in Brazil but they are also deliberately started in efforts to illegally deforest land for cattle ranching.

Conservationists say Mr. Bolsonaro has encouraged loggers and farmers to clear the land.

During his campaign, he pledged to limit fines for damaging the rainforest and to weaken the influence of the environmental agency.

Mr. Bolsonaro has suggested that non-governmental organizations (NGOs) started the fires, but admitted he had no evidence for this claim. In comments on Thursday, he acknowledged that farmers might be involved in setting fires in the region, according to Reuters news agency.

US space agency Nasa, meanwhile, has said that overall fire activity across the Amazon basin this year has been close to the average compared to the past 15 years.