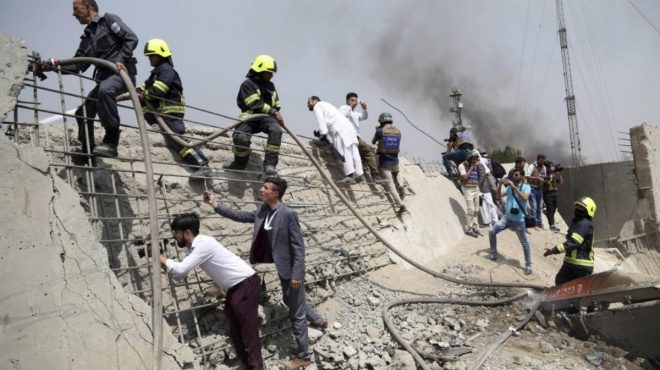 At least 16 dead in Taliban attack on NGO compound in Kabul.

A major Taliban suicide attack on an affluent area of Kabul has killed at least 16 people and injured more than 100 others.

The attack came just hours after the US said it had agreed on a deal “in principle” with the Taliban for the withdrawal of around 5,000 troops from Afghanistan.

An interior ministry spokesman said security forces had shot and killed five attackers who were attempting to storm the Green Village compound, an area full of international NGOs that have frequently been targeted by the Taliban.

The attack began late on Monday night when a tractor rigged with explosives hit the compound’s western wall, causing significant damage and destroying a number of nearby homes.

Thick black smoke could still be seen rising from the area on Tuesday morning, according to the Associated Press. Some of the fires were reportedly started by protesting Afghan locals, angry at being caught in the middle of the conflict.

The interior ministry spokesman, Nasrat Rahimi, said some 400 foreigners had been rescued in the wake of the attack.

The Green Village was previously hit by a suicide car bomber in January. That attack also coincided with development regarding America’s role in the country, as the US envoy was visiting the capital to brief the Afghan government on his negotiations with the Taliban on ending America’s longest war.

Hours before Monday’s attack, Zalmay Khalilzad showed a draft deal to the Afghan president after declaring that they are “at the threshold of an agreement” following the end of the ninth round of US-Taliban talks in Qatar.

Shaken Kabul residents question whether any agreement with the Taliban can be trusted, especially as foreign troops withdraw.

“This is what the Taliban are up to in Afghanistan; totally committed to total destruction. Can they be trusted!!??” presidential spokesman Sediq Seddiqi tweeted.

The attack comes at a time when the Taliban appears to be getting what it wants in a deal with the US – a troop withdrawal. The group wants all of the some 20,000 US and NATO troops out of Afghanistan immediately, while the US seeks withdrawal in phases that would depend on the Taliban meeting certain conditions such as a reduction in violence.