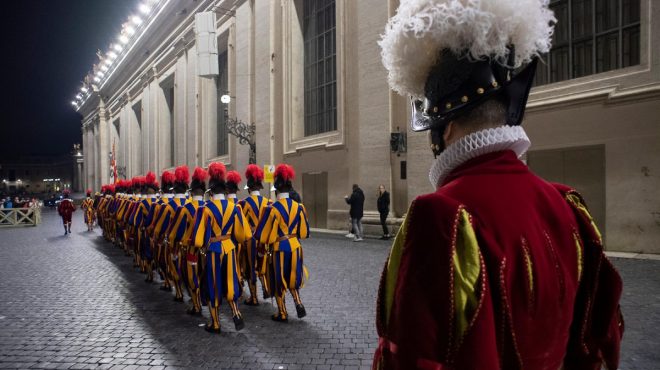 For more than 500 years, Swiss Guards have protected the Pope at the Vatican wearing metal helmets which scorched their skin in the hot Roman sun — but those days are over for the 120 members of the Holy See’s private army.

The old metal helmet has been replaced by a 21st-century high-tech, 3D-printed version, made of UV-resistant PVC, a common type of plastic.

The first wave of 95 helmets out of a total shipment of 150 has arrived at the Swiss Guard headquarters in the Vatican on Tuesday, where cadets prepared to wear them for the first time.

They often have to stand still for several hours during papal events and Swiss Guard Nicolas Albert says the new helmet’s hidden air vents are a major improvement.

“There is more space between your head and the top of the helmet which lets the air flow through,” he said.

The distinctive headgear, called a morion, has gone through various changes in the 500 years since the Swiss Guard’s founding but it has traditionally been made of metal.

The new design was created by engineer Peter Portmann and Swiss firm 3D-Prototype, by scanning the 16th century original to create a model which was then molded in PVC and painted with a water-based, UV resistant paint. It now takes just one day to make a helmet, whereas the metal model took several days.

The new versions are also cheaper than the previous ones and cost about $1,000 dollars each, paid for by private funds from donors.

American businessman, Jack Boyd Smith, President of Gaska Tape Inc. in Indiana, and his wife Laura sponsored part of the project. “I think it’s exciting,” Smith said. “Change is always good; it’s new and modern but it will still conform with the old guard, so to speak.”

Tuesday marked the 513th anniversary of the Pontifical Swiss Guard, which was founded officially on 22 Jan. 1506. As the guards arrived to receive their new helmets, Swiss Guard Nicolas Albert said there was an air of contained enthusiasm. “A lot of them are looking forward to wearing them because they didn’t really like the old helmets,” he said. “But you wear what you get,” he added.

Unlike what a popular myth states, Michelangelo did not design the colorful, distinctive uniforms of the Swiss Guard. While the uniform does date back to the Renaissance, the colors were chosen by Pope Julius II, who established the Swiss Guard in 1506, and Pope Leo X, who succeeded him in 1513. The yellow, red, and blue represent their family colors: the historical Della Rovere and De’ Medici families of the Renaissance.

The Swiss Guards are currently recruiting, but not everyone is eligible. Only single, Swiss, practicing Catholic males aged 19 to 30 and taller than 5’8″ (1.74m) are in fact considered for the job.